Last Friday we posted the first edition of our rules quiz in association with EIHA Referee Section and we asked you to make the call.

Thanks to everyone who posted their answers on Facebook, Twitter, web forums or sent us their suggestions via email to whistle@eiha.co.uk – Lewis, Martin, Marvin, Matt, Dan and everyone who took part.

Question 1:
If you have a delayed penalty signaled but the end buzzer for the game goes, do you record the penalty?

Answer – Yes – the penalty gets recorded on the game-sheet as starting at 59:59 and must still be assessed and recorded against that player.

Question 2:
The on ice strength is Team A 3 players and Team B 5 players as a result of minor penalties to Team A. Team B score at the exact time as the first minor penalty expires for Team A. Does the player serving the second minor penalty have to stay in to serve the rest of his penalty or can he come out due to the goal being scored?

Answer – The first penalty has already expired when the goal is scored and so the second penalty being served gets washed out by the goal and Team A return to full-strength as a result of the goal. Note: you should make sure that the clock didn’t run on a few seconds after the goal and that the goal was scored at the same second as the penalty expired!

Question 3:
A penalised player does not go directly to the penalty box. What should you assess?

Answer – Rule 116 ii 2- Abuse of Official – a penalised player who does not go directly to the penalty box results in a bench minor penalty to the team which must be served by another player on the ice and puts the team down another player.

Answer – Under IIHF Rule 98 i, this should be ruled a goal. It meets both criteria:
The opponent was in the act of shooting prior to the goal frame being displaced;
The referee determines the puck would have entered the goal net had the goal frame been in its normal position.

How did you fare on those questions? 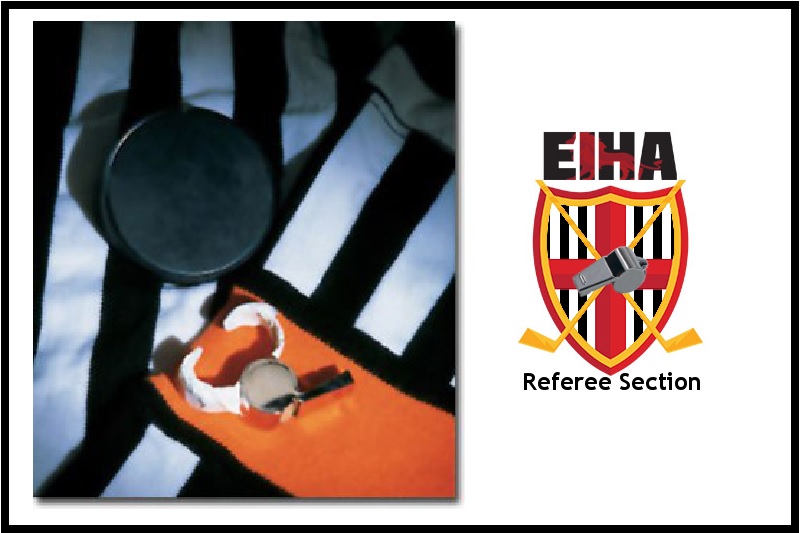 On to this week’s problems – YOU make the call in each of these scenarios:

Question 1:
The referee has signalled a delayed penalty on Team A. Team B accidentally put the puck in their own net. State the referee decision.

Question 2:
The referee has signalled a delayed penalty on Team A. Team B attempts to pass the puck to a team-mate but it deflects off a player from Team A and goes into the Team B goal. State the referee decision.

Question 3:
After a penalty call a water bottle is thrown off the bench onto the ice. State the referee decision.

If you want to email you can whistle@eiha.co.uk or reply to the Facebook or Twitter post with your suggested calls.  As usual we’ll give the answers next week with relevant IIHF rules or casebook references or in-house rules as appropriate.

We’ve also had a couple of suggested topics for rules tests which we’ll try to incorporate throughout the season – if you have a particular rule or group of rules that you think could be given a wider circulation then drop us an email as before.

Thanks as always to Joy Johnston at EIHA Referee Section for supplying the information and hopefully the fans in the stands can appreciate the job of #TeamStripes a little better.