Bracknell Queen Bees added the Bill Britton Trophy to their Elite League title and finished a perfect season with 21 wins from 21 games played. 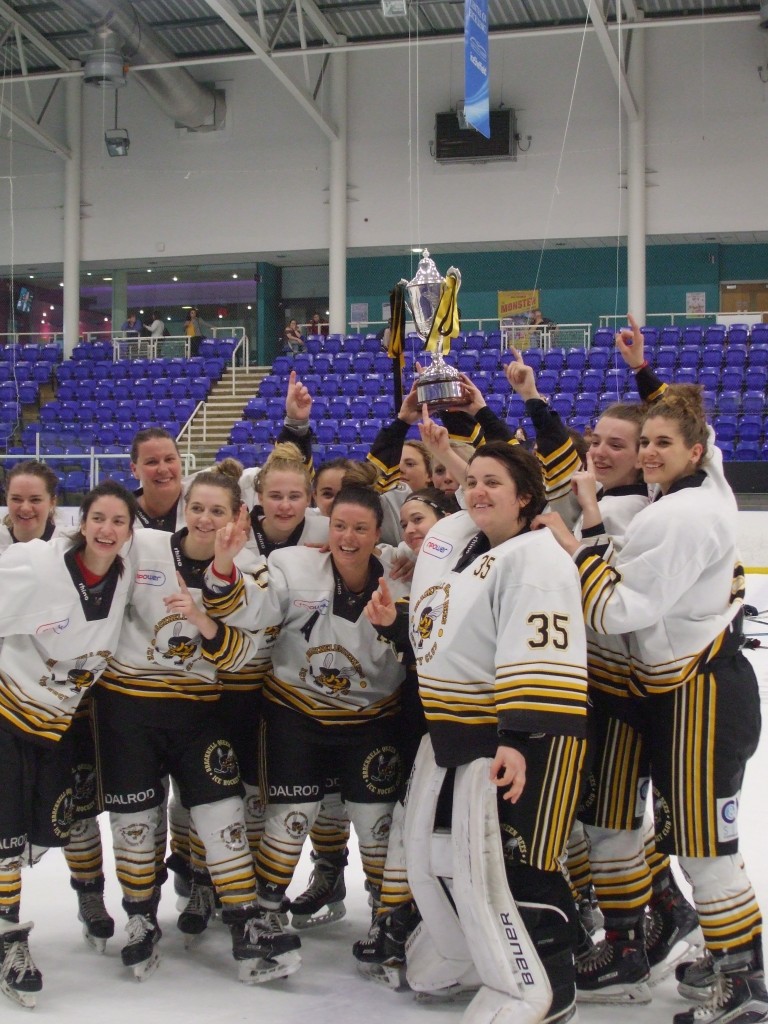 After lifting their seventh consecutive league crown, the Queen Bees came from behind in both playoff games to hoist the final trophy of the 17/18 domestic season.

In Saturday’s semi final, Kingston Diamonds opened the scoring through Sophie Campbell at 5.19 but the QBs responded with Anja Kadijevic’s equaliser at 14.47. Kingston though would head to intermission with the lead as Hannah Worthington shot past Sam Bonathan with 30s left in the period to make it 2-1 Diamonds.

From then on, however, it was one way traffic. Abbie Sylvester’s bomb on the PP tied the scores (24.00) before Rachel Cartwright and Nicola Bicknell netted twice in 90 seconds to make it 4-2 before the halfway mark. Another quick double in the 36th minute – Emily Harris (pp 35.22) and Louise Beresford (35.40) on target – stretched the lead to 6-2 after 40 minutes.

Final period markers from Sophie Herbert and captain Lauren Summers in the last ten minutes of the match put the seal on a comprehensive win for the Queen Bees by 8-2.

Vixens started at a great pace, jumping out to a big first period lead. Rebecca Speckman set them on their way at 8.39 before Kennedy Wallace doubled the lead at 11.39. When Martina Krupkova poked home a rebound at 14.33 it as a 3-0 scoreline.

The middle frame appeared to be heading for a scoreless conclusion until Guildford broke their duck at 37.50 with Amy Mansbridge finally beating Michelle Franklin in the Solihull net.

Any hopes of a Lightning comeback were extinguised early in period three with a double from Solihull – Paige Dance and Katie Henry netted a minute apart and it was 5-1. Mansbridge bagged a second in the 46th minute but Solihull, backed by Franklin’s 43 saves held out and made it through to a repeat of last year’s Bill Britton Trophy Final. 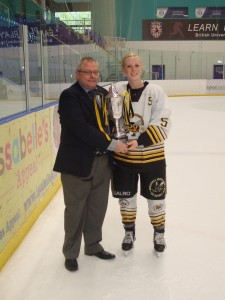 Sunday’s final began with the teams feeling each other out, with few clear chances. It was Solihull who finally broke the deadlock at 12.37 through their captain Katie Henry. The lead held till 17.20 when Emily Harris lit the lamp and the first interval arrived with the teams level at 1-1.

Katherine Gale put Queen Bees ahead for good just before the half hour, with Anja Kadijevic making it 3-1 at 34.24 on the powerplay. Sophie Herbert capitalised on a loose puck in the final minute of the period (39.06) and it was 4-1 with one period to play.

The Queen Bees were relentless to the end, generating 17 shots on goal with only five back the other way in the final period, and Emily Harris (43.06), Rachel Cartwright (43.58) and Abbie Sylvester (47.12) added to their goal tally to make the final score 7-1 to Bracknell.

Swindon had beaten Kingston 2-0 in the first semi final, Rebecca Da Cova and Jessica Sprules on target backed up by Amelia Mcginlay’s 19-save shutout. Milton Keynes defeated Chelmsford Cobras 5-1 in their semi final, with Rachel Piotrowski picking up 3+1 with other goals from Lydia Howton and Kirsten Noble. Abbie Sylvester was the lone scorer for Chelmsford. 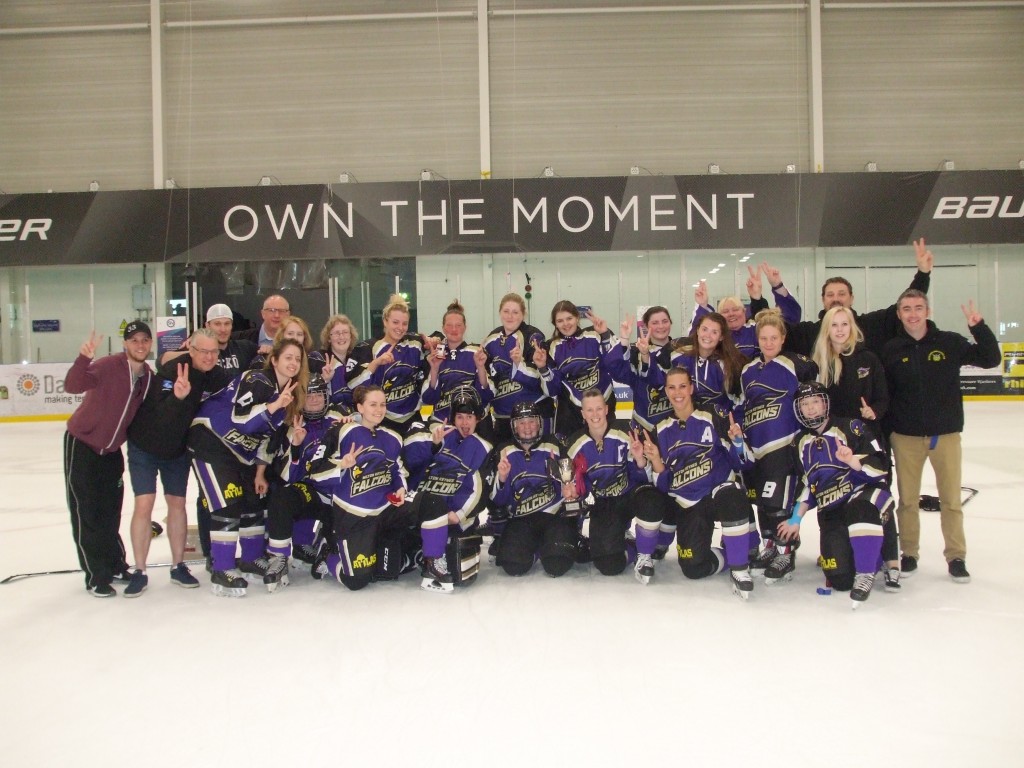 The WPL final was a tense affair. Falcons were in front early, Piotrowski converting from the slot at 7.05. Late in the first period, MK were on the powerplay. In a carbon copy of the first goal, skipper Sam Payne passed from down low onto the stick of Piotrowski and it was 2-0 at the first interval.

The middle frame was a cagey affair, just 13 shots on goal between the two sides, but Swindon pulled themselves back into the tie at 36.12 through Rebecca Osman, setting up a grand stand finale.

Period three could best be described as an onslaught – Swindon created chance after chance, attacking the MK net again and again but great defence and Kayliegh Doyle in net – 17 saves in period three alone – meant there was no way through for the Topcats and MK Falcons were back to back trophy winners.

Whitley Squaws won Super Sunday’s first game, the Division 1 Trophy Final, with an entertaining 7-4 win over Blackburn Thunder. The win gave Whitley promotion to the Premier League for next season in addition to the playoff trophy.

Blackburn struck first with Rachel Pearce at 16.25, the only goal of the first period. Tee Lewis levelled for Whitley at 23.09 but parity only lasted 17 seconds before Abigail Culshaw put the Thunder back in front. Culshaw overturned a Whitley powerplay at 27.19 to score a shorthanded goal and stretch the Blackburn lead.

The Squaws hit back with a brace just past half hour through Steph Towns and Melissa Gough and the tie was all square at 3-3. Culshaw completed her second hat-trick of the weekend at 35.13 to put Thunder back in front, but Towns’ second before the buzzer made it level again heading to intermission. 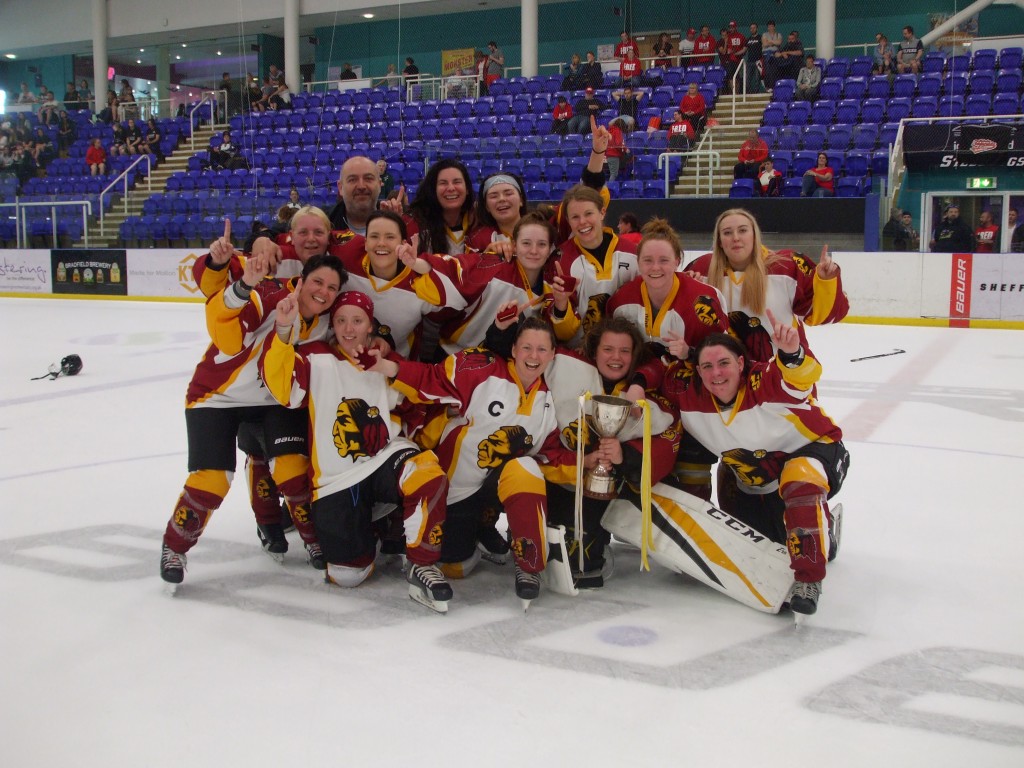 Whitley’s #33 duly completed her second treble of the weekend at 44.29, a goal that would stand as the game winner, adding an insurance marker at 53.49. With time winding down, Towns was on the spot to fire a seventh into the net just as time expired giving her 5+1 in the match and the Squaws were playoff champions but more importantly to them, they were back in the Premier League.

Bracknell Ice Bees made it a great weekend for their club with a 6-0 success over Kingston Diamonds in the U16 Trophy Final. Like their senior clubmates, the Ice Bees were perfect in the regular season and a three-goal blast in the first 3.38 of the Trophy Final set them well on the way to a double of their own.

Emily Harris and Maisie Breakenridge led the scorers with 2+1, with Lucy Beal and Charlotte Harris adding the others. Emma Nichols in net picked up a shut out and an assist on the sixth goal for good measure. 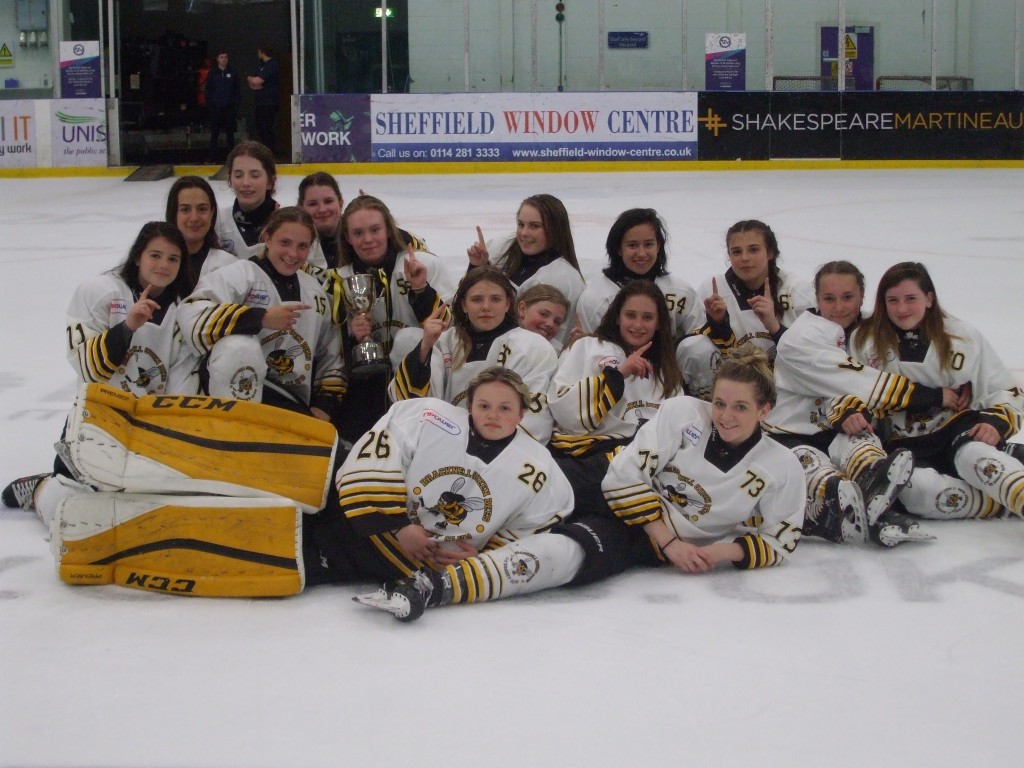 The women’s league season will resume in September, we’ll have news from the section meeting when the promotion and relegation issues are confirmed for all divisions. 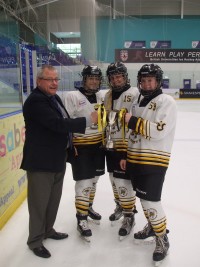 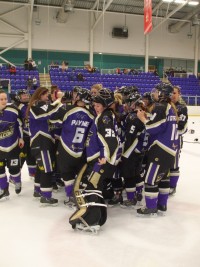 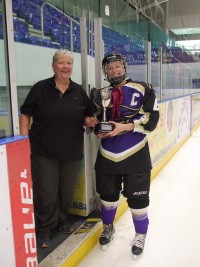 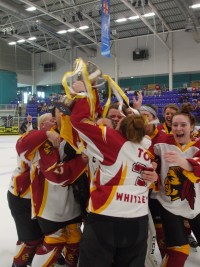 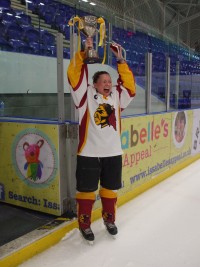