Twyford’s Verity Lewis is part of the GB team – and will take part in the Ice Hockey Skills Challenge – after coming through the IIHF qualifying process last year.

Lillehammer 2016, which runs from the 12th to 21st February, will see around 1,100 of the world’s best young athletes descend on Norway to compete in 70 events during 10 days of winter sport action.

Team GB’s delegation will feature in seven of the 15 disciplines that make up the sporting programme.

Lillehammer 2016 is the fourth edition of YOG, which started with Singapore 2010, and will be the second Winter Games following Innsbruck 2012.

Verity said: “I’ve been working towards this moment for a long time and to finally know that I’m going to be part of Team GB for the Youth Olympic Games is a dream come true.

“It’s so exciting to think we’re only two weeks away from flying out there.

“The skills challenge is a tough event but preparations have been going really well and I’ll be looking to do the best that I can in Lillehammer next month.”

Chef de Mission, Adam Pengilly, said: “It’s really exciting to announce the team and in just a few days’ time we’ll be gathering together to kit the team out and to assemble for the first time before flying out to Norway.

“This will no doubt be the pinnacle of these athletes’ careers so far and we want the Youth Olympic Games to be part of a journey to help with their development both as competitors but also as people.

“Lillehammer 2016 will be about them gaining the experience of being part of an Olympic environment as well as delivering the best possible performance that they can.

“We’ve got a great mix of sports and we’re represented in seven of the 15 disciplines, with quite a small delegation. I’m sure we’re going to see some exciting things from these young athletes in Norway and beyond.”

Ice Hockey UK general secretary, Andy French, said: “Everyone is very proud of what Verity has achieved so far.

“She has such a determination to succeed and is one of the brightest young prospects in our game.

“Good luck to her in Lillehammer and I know she will do Great Britain proud.” 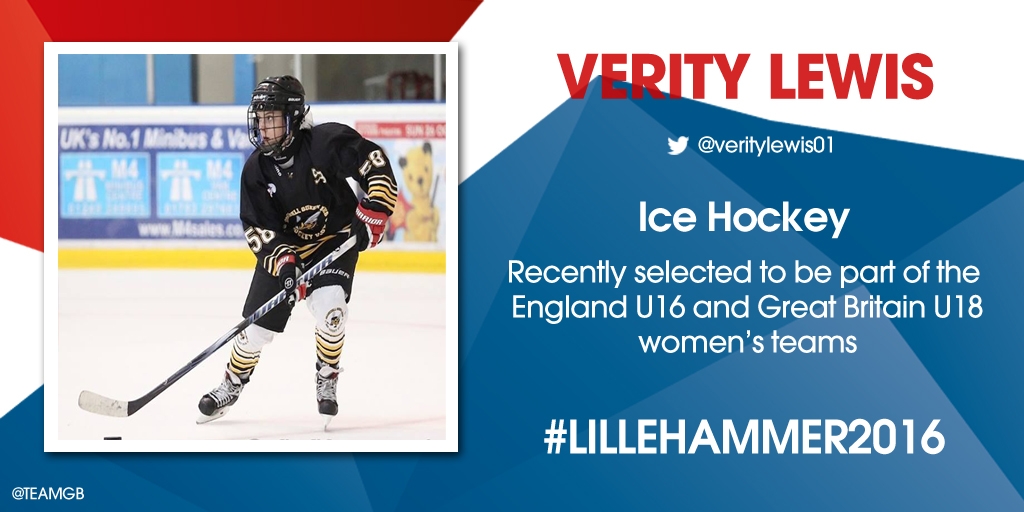