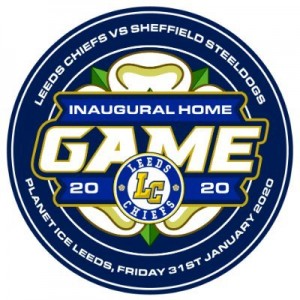 NIHL National brings a new venue on stream tonight as the Leeds Chiefs play their first game at their Elland Road base, facing off against in a Yorkshire derby with Sheffield Steeldogs (7.30pm).

Chiefs have had to play ‘home’ games at seven other venues while they waited for work to be completed on their new permanent rink.  Now Sam Zajac will lead his troops down the stretch with twelve home games remaining as the Chiefs chase a playoff berth in their inaugural season.

All available seats have been sold for tonight’s game with over 600 fans expected.

Rookie player-coach Zajac told the Yorkshire Post: “I can’t imagine that there will come another time, certainly in my playing career where you’re going to be among the first guys to step out on the ice for a brand new team, in a brand new venue in a city that has never housed ice hockey before.

“The guys are rightly going to savour that and all we’ve said is be in the moment, make sure you enjoy it all – but the most important thing for us is the two points.”

Leeds have been on a great run in recent weeks, taking five points from the last three games including a win over league-leaders Telford Tigers.

Sheffield Steeldogs, seventh in the NIHL National table, were the Chiefs’ very first opponent at Ice Sheffield in September and have won four of the six games between the sides so far.  The final two games in the series are both at Elland Road starting this evening.

Elsewhere in NIHL National tonight, Peterborough Phantoms host Hull Pirates in the second leg of the National Cup semi final (7.30pm).  Phantoms lead 4-2 from the first leg in Hull two weeks ago, with the winners going up against Telford Tigers in the two-legged final next month.  Tickets are still available from gophantoms.co.uk/tickets/ or there is a webcast available.