#TeamStripes – You Make The Call, week 5

The latest Level 1 course took place in Nottingham last weekend, look out for more courses being announced very soon by IHUK Referee Section – we are always recruiting members for #TeamStripes so if you’ve ever thought about officiating then keep an eye on this page over the next few days.

We’re back with the latest installment of You Make The Call where we pose three rules-based questions and ask you to give your decision.  Before we give you this week’s teasers, here are the answers to last week’s YMTC. 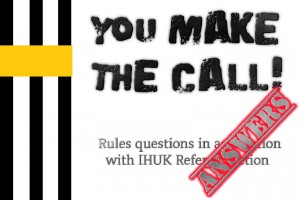 Question 1:
Can you give a 2+2 for high sticking for accidental harm to an opponent under the IHUK in-house rules?
Rule 143: High Sticking IHUK In house rules
This rule remains as printed in the IIHF Rule Book with the following exception: Part ii) is not to be used. Any high stick causing an injury in any league will be assessed a Match penalty (to be downgraded to a 5+Game if the injured player returns to the ice.)

On that note, here’s this week’s trio of topical teasers.

Question 1:
A team official who is involved in a fight should be assessed what penalty/penalties?

Question 2:
If a player refuses to surrender a stick for measurement when requested by the referee or he destroys it what penalty should be assessed?

Question 3:
A player makes physical contact with an opponent after the whistle has been blown and there was sufficient time to avoid contact – what penalty should be called – Interference, Roughing or Charging?

Leave us your comments on the social media threads and come back next week to check for the correct answers.  Remember you’ll need the IIHF Rulebook, casebook and IHUK in-house rules, all of which are free to download from the information superhighway.