#TeamStripes – You Make The Call – Week 17 the answers! 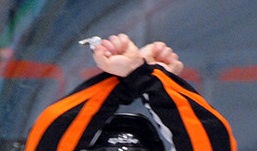 Hope you enjoyed your hockey weekend just gone – now here’s what you’ve all been waiting for – the YMTC Answers!

We posed three scenarios around how a penalty shot is taken during a game – how did you get on?

Here’s the answers with references to find the full rule/casebook explanation.

Question 1:
During a penalty shot what side of the ice should the referee stand?
Preferably on the stick side of the ice.
The referee shall then take up a position on the goal line about 3 to 4.6 metres from the goal. Preferably, the referee’s position should be on the side of the goal nearest the player’s stick to give a better view of the shot. Referee Procedures Manual Sec 4 page 28

Question 2:
If the netminder leaves his crease before the shooter has touched the puck on a penalty shot what should the referee do?
Raise his arm (as per delayed call) and allow shot to be taken – if shot is unsuccessful a penalty shot re-take will be done. A warning to the netminder should be issued.

Question 3:
If the netminder repeat his action of leaving the crease before the shooter has touched the puck on a penalty shot for a third what should the referee do?
The Referee shall allow the shot attempt to proceed and award a goal even if it was not successful (player shooting is to be awarded goal if he fails to score).

We will be back with more this weekend, thanks to our friends at IHUK Referee Section for their assistance.