Stripes, zebras, barcodes… and probably many other unprintable names for the on-ice officials crew.  Love em or not, they are a major part of the game.  Over the past couple of years, IHUK Referee Section has run several courses to attract new officials into the game, while the continuous development and training that takes place helps with retention and progression of officials up the ladder.

Over a dozen new recruits completed the latest Level 1 course in Aberdeen last week, and it is hoped that they will register with IHUK and begin their officiating career very soon.

Team Stripes is the fastest growing team in the UK, but always looking for more recruits.  The next level 1 course is in Sheffield in January and Fife the following month.  Players looking to transition into officiating are also very welcome and they should get in touch with IHUK Referee Section.

Check out the EIHA website article for full details on how to book a place on the courses and details of the Referee Section. 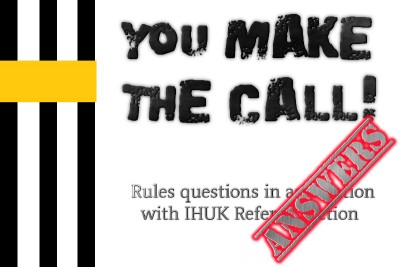 Question 2:
If a net-minder deliberately displaces the net during with 1 minute to go in the third period – what should the ref do?
Award a penalty shot.
Rule 213 ii – If a goaltender displaces the goal net from its normal position in the last two minutes of regulation time or at any time in overtime, a penalty shot will be awarded to the opposition.

Question 1:
A player turns his back at the last minute to an opponent who is coming in for check – should a penalty for checking from behind be called?

Question 2:
The linesman sees an injured player on the ice. Can he stop play?

Question 3:
A player who makes deliberate contact with an on ice official should be assessed what penalty?