Two pieces of memorabilia from Great Britain’s gold medal-winning tournament in Belfast have been donated to JLMC by Ice Hockey UK to raise funds for our nominated charity, The Jack O’Donnell Foundation. 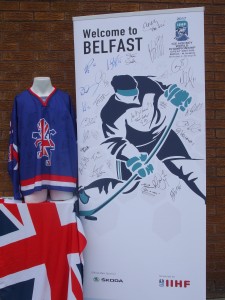 IHUK have donated a replica blue GB jersey as well as an advertising banner used around the SSE Arena during the tournament.  Both items have been signed by players and staff from the successful Great Britain squad.

This is being run as a separate raffle by the JLMC with tickets being sold throughout the weekend, at just £1 per ticket.

There is a strong link between the GB squad and Conference with 19 of the 23 who played in Belfast graduating through the Conference system.

All fundraising efforts by the JLMC this year is supporting The Jack O’Donnell Foundation in memory of the former South West and England player who died in 2010 aged just 15.

JLMC chair Jacqueline Pye said: “The tournament in Belfast was such a great week, it’s fantastic to be able to keep those memories alive with these raffle prizes.

“We are grateful to our colleagues at Ice Hockey UK for donating them and to the players and staff for signing them for us.

“I hope this and our other fundraising efforts are successful and we raise a huge sum for Jack O’Donnell Foundation.”

The events kick off this evening with the Orange Friday promotion, which features England v Scotland u19s and the Mighty Mites u9s as well as fun and games around the whole rink.

Admission to Ice Sheffield tonight, Friday, is FREE.  Tickets for Conference Weekend are on sale from reception between 1700-2130 today – a tournament pass for all three days is £20 adults, £10 children with day tickets £10/£5