Sheffield Steelkings are the British Para Ice Hockey Playoff Champions after a resounding 8-1 win over the Cardiff Huskies in the final at IceSheffield on Sunday. 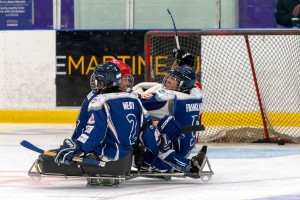 They completed the domestic double with hat-tricks from Jake Oakley and Matt Clarkson along with a brace from Matt Woollias.

If there were any nerves ahead of playing the final – the club’s first – on home ice they were diminished early as the Steelkings built up a three goal first period lead through two Clarkson strikes – both assisted by Oakley – and one from Woollias.

Tyler Christopher was always a dangerous spark for Cardiff, and he provided a warning shot that Cardiff were not to be battered aside, forcing a save from Bryan Hackworth in the Steelkings goal in the dying seconds of the period.

The first of Oakley’s trio was the only score in the second frame, although the Steelkings enjoyed periods of dominance and forced several stops from Gareth Rees in the Huskies net. Once again Christopher threatened to score for Cardiff in the closing stages of the half as his effort forced a goalmouth scramble in which the Steelkings were saved by the buzzer to end the period.

Clarkson completed his hat-trick before Christopher did get his finals goal early in the third period, taking advantage of an accidental collision between two Steelkings defenders to race onto a pass from Jonathan LeGalloudec and lift the puck past Hackworth. 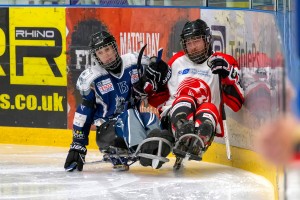 The Steelkings qualified for Sunday’s final with a 10-2 win over the Peterborough Phantoms on Saturday. Clarkson had opened the scoring inside four minute, before a powerful top-corner blast from Scotty Turner levelled the scores. The Steelkings responded in force with three more Clarkson goals and a first Steelkings goal for Rachel Rawson before Callum Shakespeare prodded home from close-range to pull one back for the Phantoms.

There were still five more Steelkings goals; two for Woollias, one for Clarkson and for Barry Grayson who fired home a rebound after a sweeping Steelkings counter-attack and another first ever goal for Matthew Franklin who fired home in the near top corner from a breakaway down the left-hand side of the Peterborough defence.

Steelkings club Chairman Jake Oakley said: “I can’t begin to tell you how proud I am of this team. It’s taken a lot of blood, sweat and tears to get this far and every single player has worked so hard to get where we are now. I’m so happy for us and for the club to have achieved what we’ve achieved in five years and especially in the last twelve months.” 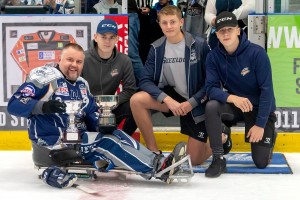 Cardiff beat a depleted Manchester Mayhem 9-1 to setup the final encounter with the Steelkings. Mayhem were without key players Karl Nicholson and Peggy Assinck and were short-benched. They fell behind in little over a minute with Josh Campbell assisting Paul Furber. Campbell turned scorer himself, off a pass from Tyler Christopher before Christopher scored four of his own. Anthony Booth scored a consolation goal for the Mayhem before further goals from Furber, Jonathan LeGalloudec and Hannah Tomsett.

The Mayhem defeated the Phantoms 7-3 in the third-place playoff. Karl Nicholson returned and scored after only 44 seconds and added a second at 10:55. Rob Allen added a third at the start of period two only for Peterborough to threaten a comeback with strikes from Scotty Turner and Ashley Greening, the youngest player in the league.
Manchester quickly quashed any hopes of a recovery, scoring three more third period goals through Allen and two further Nicholson strikes.

The third period saw Turner pull another one back for the Phantoms only for Nicholson to round out the scoring with his fifth of the game.