Sheffield Steelkings won the first ever Kings Cup with a dramatic 3-2 overtime win against France’s ‘Para Ice Hockey HCCA Dahu 63’ in front of around 200 spectators at IceSheffield last Sunday evening, with almost 150 watching a live stream of the game.

Wayne Plummer scored the game winning goal at 3:15 of overtime, lifting a rebound from his own shot over the Dahu goaltender’s pad after Jake Oakley drew in the defenders to create the space for the shot. 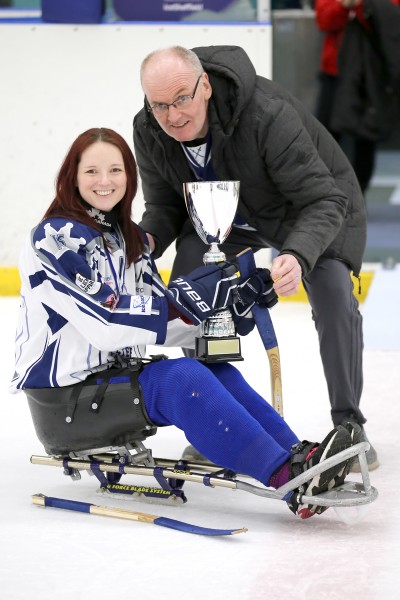 The Steelkings got off to the best possible start, taking the lead at 0:41. Oakley – who had a goal and two assists on the day – kept the puck in on the blue-line and pushed down Dahu’s left flank, snaked around a defender and behind the French net before squaring the puck towards the centre of the goal for Steelkings captain Rachel Paget to score.

Dahu levelled things up at 4:46 through the impressive Vincent Coudignat with an assist from their captain Delphine Gerard.

The Steelkings failed to clear the puck from a defensive zone face off, and Coudignat worked his way across the slot and into close range before firing low under goalie Bryan Hackworth.

However, the Steelkings were back on top immediately; as Paget returned the favour by releasing Oakley into Dahu territory down the left and this time he cut across the face of goal and fired home at 5:00.

The Steelkings held their 2-1 lead until 14:58 of the second period; Coudignat once again scoring for the visitors, cutting in from the Steelkings right face-off circle and unleashing a powerful effort into the bottom corner.

The third frame was a tense, end-to-end affair with both teams having some breakaway chances to seal the win; and both teams can thank the fine work of their goaltenders for some crucial stops.

The game headed to overtime and Dahu had the early advantage with a lot of pressure in the Steelkings zone; but ultimately the Steelkings won it with a goal which reflected the end-to-end nature of the contest.

Dahu seemed to have manufactured an odd-man rush for the chance to clinch it, but the puck was played too far in advance of Gerard. Oakley raced onto the clearance and squared for Plummer in the centre-slot; who saw his first effort blocked by Coudignat but was on hand to flick his own rebound over the leg and under the glove of the Dahu goaltender to seal the win.

On winning the inaugural version of the competition, Oakley said: “I am so thrilled to see our first ever international competition be such a success. Despite all the hard work behind the scenes, the first ever Kings Cup has been amazing and we can’t wait to invite the next team to join us in 2020.

“This has been another amazing showcase for our sport and the Sheffield Steelkings, and this is only the beginning. We have so many big plans ahead and we can’t wait to make them a reality.”

The Steelkings wish to say “Merci” to Dahu for their participation in this first ever Kings Cup and wish them a safe journey home.

They also look forward to defending the kingdom once again when the next invaders play for the 2020 Kings Cup.