EIHA head of referee training and development Joy Johnston says she was delighted with the response to the association’s first in-season development seminar for EPIHL and NIHL officials which took place last weekend.

Over 70 officials – both referees and linesmen – attended a Sunday morning event which then allowed them to travel on to their games that evening.  A keynote address was given by FIFA referee Mark Clattenburg who highlighted many of the same issues that on-ice officials face – pressure from players, managers, media, supporters as well as the huge rise in social media.

The north east official has a link to ice hockey as he explained in his interivew with EIHAtv before the seminar.  His family originally came over from Canada and his grandfather was a goalie with the Durham Wasps.  He settled in the north east and as a youngster Mark would attend games at the Riverside Rink where his favourite player was Rick Brebant.

Joy Johnston said: “The meeting was not mandatory so we were pleased to have over 70 officials attend. The high take up of this event shows their sense of pride in doing a good job on the ice and their commitment to their own development.

“We look forward to hosting more in-season meetings to focus on development and training for officials throughout the season and particularly as we go into play-offs.”

On the address given by the guest speaker, Johnston said: “It was great to have a high profile keynote speaker for the event.  Mark Clattenburg spoke to the officials about a number of topics and they were able to draw parallels and learn from his experiences in managing social media, pressure from players and coaches and his thoughts on what it takes to be a successful referee.”

After the keynote address, the EIHA officials reviewed officiating training trends from video clips submitted by clubs for training purposes. 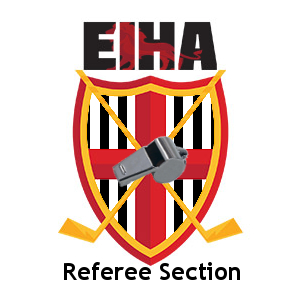 Johnston added: “These video have proved to be a great resource for training the officials and is another example of how this season we are stepping up our commitment to development which should result in an improved officiating product on the ice.”

Further in-season sessions are planned as well as regular email communication from the EIHA Referee Section to all officials highlighting issues, trends and important rules interpretations.

Early in the new year the Referee Section will be publishing the details of the brand new level one officials course.  If anyone is interested in becoming an ice hockey official then click here to read more.