OFFICIALS: Cloutman playing his part in development of future officials

Dave Cloutman has called games at every level in the UK, but now says stepping off the ice is something he has to do to help the next generation reach the same heights as him.

The Hampshire-based official has now called time on his on-ice career after 33 seasons to take up a new role as an officiating manager in the Ice Hockey UK referee section.

New IHUK Referee Chief Joy Johnston approached Cloutman at the end of last season to ask him to take on the new role, but explained it needed him to be off the ice to do it.

“I could have kept going for another two or three years as a referee,” said Cloutman.

“The change in the senior leagues presented new opportunities and new challenges and I was already thinking about next season.

“Joy made the pitch about the new structure and the plans for officials managers, supervisors, trainers and mentors – and I was intrigued. It’s something I’ve discussed with other colleagues many times before, but it would mean stepping off the ice.

“It was a tough decision but within an hour or so of the initial presentation, I knew it was something I wanted to be part of.

“Stopping refereeing wasn’t something I necessarily wanted to do, but something I felt I needed to do to help shape the future development of officials.

“So the whistle is getting rusty, my gear is in the attic and the skates sitting unused. And I’ve probably done more work this summer to prepare for a new season than any in the last 30 years!” 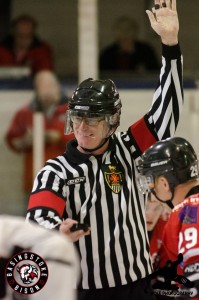 Cloutman is the officiating manager for Level 3 which covers the U16 leagues in Scotland and the U18/U20 leagues in England, working with Matt Thompson who will manage the assignments that L3 officials receive. Other officiating mangers have been appointed with similar experience to Cloutman.

“What excites me the most is working alongside Matt with the officials who are the future playoff finals refs, the future IIHF license holders. Maybe someone will reach the same levels as Joy achieved with an Olympic gold medal game.

“Right now, all of those options are available and now with the structure in place, officials who work hard and are determined can be managed through the levels and can go as far and as high as their abilities permit them.

“The management team are fully behind the new set-up and looking at the officiating managers alone, we must have 150 years’ experience behind us to pass on.

“The assignors bring another 100 to 150 years’ experience. All of a sudden you see there’s a lot of knowledge available for the up-and-coming officials to tap into. It’s our jobs to make sure that knowledge is passed on and used by the officials to develop and get better.”

A drive to get former players into the ranks of ‘Team Stripes’ is also part of Cloutman’s remit and again the new structure will allow former players to be managed into refereeing by taking account of playing experience and not necessarily making them start from Level 1.

“Matt and I have spoken to some players about taking up refereeing and so far nobody has given a flat ‘no’. Some guys who have just stopped playing want time with family and want to consider what they want to do next. But we have got some interest and it would be great to have them on the ice as part of our team.

“When the players are ready, we have the structure in place and they can join from an appropriate level and take it from there.”

While looking ahead to the next phase of his officiating career, Clouts was able to look back at some on-ice highlights.

“I have been fortunate enough to work at every level in the UK – that’s BNL, Superleague, Elite League and EPIHL. I refereed the first game in Belfast which was amazing. My first game as a referee at the old Wales National Ice Rink was a proper ‘hairs on the back of your neck’ moment when they sang Land of My Fathers, that was special.

“I was successful in gaining an IIHF license and did a few tournaments abroad, with the highlight being a four-team tournament in Ljubljana and I did Austria v Italy.

“More recently I was part of the crew for the first EPIHL finals and in the season just ended I was there at the last EPIHL finals.