Telford Tigers saw off Streatham IHC 9-6 in the National Cup, an entertaining 4-4 draw at Telford completing the tie.  Sheffield Steeldogs won home and away against Solway Sharks to win their quarter final, in a head to head series which also counted in NIHL North 1.

Here is an at-a-glance look at the weekend scores, thanks to David Strover for the graphics. 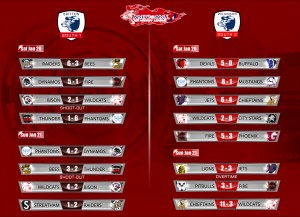 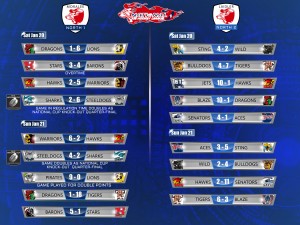 The media coverage began late on Sunday night with David Carr’s regular NIHL South 1 round up for Pro Hockey News.  Includes hockey chat in among talk of pea fritters, carveries and vino rosso.

Michael Black reviewed the action in NIHL North, also for Pro Hockey News, and focussed on Steeldogs double double against Solway.  A useful one stop shop for all things Northern – without the chip-shop related badinage of the London Bureau correspondent.

Staying in the North, blogger Northern Trio posted an interview with Whitley Warriors player-coach David Longstaff.  Some of the comments around the standard (and nationality) of NIHL players caused plenty of social media traffic.  Read for yourself below.

Taking the time to reflect on his ice hockey career, Whitley’s player-coach @davidlobby looks back on his achievements in the sport, shares his thoughts on the NIHL and reveals which Warrior has made the most progress in recent seasons…: https://t.co/5vswwXQZEg.

Longstaff’s comments drew an opinion blog from  Michael Black which appeared this afternoon.

BLOG – Longstaff’s criticisms of NIHL North, coaching and imports under the spotlight https://t.co/3zeUZ6xf0p

Peter Dudley is a relative new blogger on the NIHL scene, reviewing the action from the South in a ’roundup’ style similar to MJB.  His report on last weekend can be found below.

Here is my blog on the latest goings on in the @NIHLhockey South Divisions @482days https://t.co/1C8kbqx0ge pic.twitter.com/1Gov6aqMne