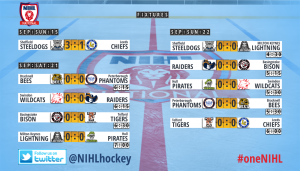 It’s the first full weekend of the new Tier 2 competition, with a bumper programme of fixtures. Swindon Wildcats get things underway on Saturday with the visit of Raiders to Link Centre (6.15pm), while Bracknell Bees and Peterborough Phantoms clash at JNLC at the same time. Basingstoke Bison welcome Telford Tigers to Hampshire for 6.30pm puck drop, before Milton Keynes Lightning and Hull Pirates lock horns for the third time in quick succession at 7pm. 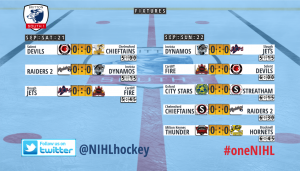 Solent Devils make their seasonal debut in South 1 on Saturday, Chelmsford Chieftains the visitors to Gosport (5.00pm). Raiders 2 face off against Invicta Dynamos (5.15pm) and Slough Jets bring Cardiff Fire to the Hangar for a 5.45pm start. In South 2 West, Bristol Pitbulls go against Swindon Wildcats 2 with face off at 5pm. 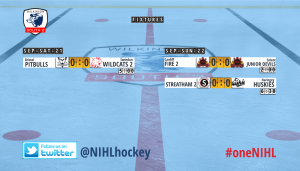 Fire-Devils double bill as the South 2 West Cardiff Fire v Solent Devils faces off at 2pm ahead to the D1 clash of the same teams. South 2 East has just one game on the list, Streatham Hawks hosting Haringey Huskies at 6.30pm

The North and Midland Cup competitions make a bow this weekend along with league play in both Moralee and Laidler. 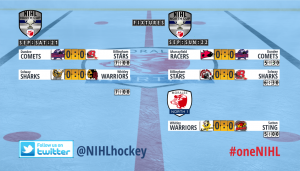 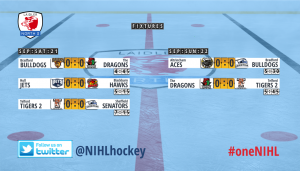 You can track all #oneNIHL games from the NIHL homepage at eiha.co.uk/nihl where there are links to all competitions to see fixtures, results, tables and stats. Follow @NIHLhockey on Twitter and use the #oneNIHL hashtag to keep up to date via social media.