The National Ice Hockey League (NIHL) season finally draws to a close this weekend, as Chelmsford Warriors and Peterborough Islanders play their home-and-home series for the NIHL S2 Playoff title.

Islanders and Warriors finished first and second in the NIHL S2 East division, with Peterborough winning all four of their league encounters in regular season play.

In the first round of the playoffs, Peterborough won their series against Bristol Pitbulls 14-6 on aggregate.  A 4-1 win in Oxford on Saturday was followed by a 10-5 goalfest at Bretton the next evening.  There were 11 different goalscorers across both teams as the scoring was shared around.

Chelmsford were pitted against Cardiff Fire in the other semi final.  Due to a lack of ice availability, Chelmsford could not host their home leg so the tie was played as a single-leg shootout at Ice Arena Wales last Sunday.

Warriors travelled with just 12+1, however they confounded the Fire with five unanswered goals in the second and third periods.  Cardiff were 2-1 up at first intermission, however Chelmsford ended up winning by 6-2, lead by Ross Brears and Brandon Ayliffe who both posted 2G and 2A for a four point night.  So Warriors put out the Fire in the playoffs for a second straight year.

This weekend then, the final weekend of the NIHL season for 17/18 begins on Saturday night in Chelmsford.  The Warriors home leg faces off at 17.40.  The second and deciding leg is at Planet Ice Peterborough, faceoff 17.30 on Sunday night.

Peterborough are NIHL S2 East league champions and Cup winners this season and looking to complete the domestic treble.  The treble was won by Chelmsford last season and they are defending playoff champions.  It promises to be a great series.

Tickets are available on the night at Riverside Ice & Leisure and Planet Ice Peterborough respectively. 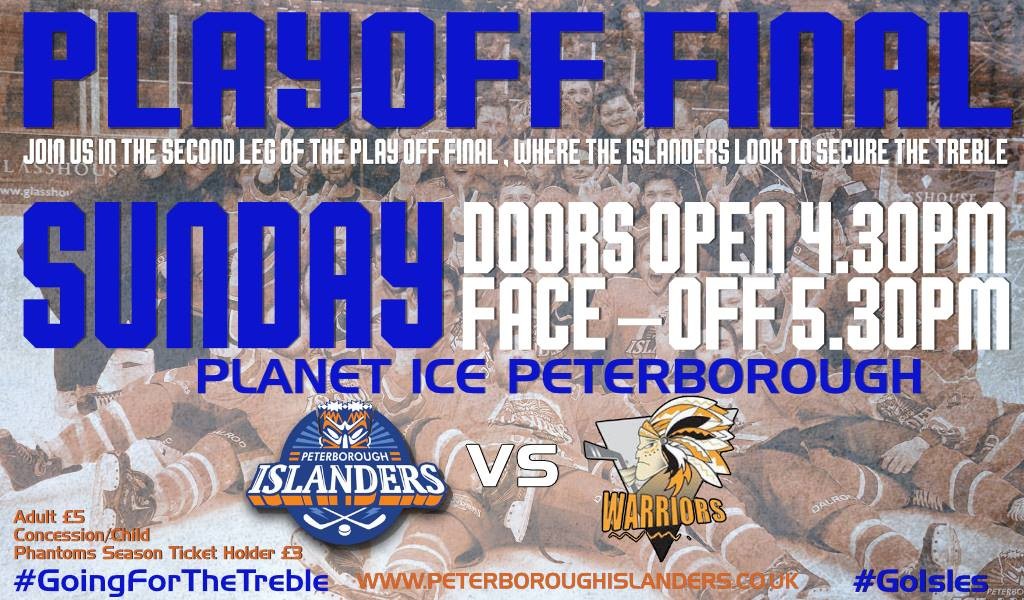