National Ice Hockey League (NIHL) bosses are delighted with the response from supporters heading to the NIHL Final Four weekend in Coventry on 7&8 April.

Tickets for the showpiece season finale went on sale one week ago, and the League Management Committee have confirmed the sales have already passed the break-even point and the event will return a surplus which will be shared among the NIHL 1 teams.

The Final Four is at the end of a four week long postseason for clubs in Moralee and Britton divisions of the league and features the playoff finalists from north and south facing off to determine a true national champion.

League Manager Richard Carpenter said: “For the NIHL as a whole this is brand new and we couldn’t be happier with the response from supporters in the first week of ticket sales.

“Our friends at Planet Ice were a great assistance in planning the release of tickets and they managed the peaks throughout the week, using their experience of holding this kind of event for many years before.

“From the figures we have, over 1100 tickets have been sold for the weekend, and at this early stage we know that it will cover our costs and any surplus will be shared evenly around the NIHL 1 clubs.

“The weekend format has been used in the north for the last four seasons quite successfully, and of course the former EPIHL sides are used to the Coventry weekend, but it’s a new experience for many clubs and fanbases particularly from the NIHL South 1.

“We hope that supporters who are used the atmosphere and experience of a Finals weekend can share their stories and encourage as many supporters from all NIHL sides to make the trip to Coventry and join a true carnival atmosphere in and around the rink.”

Details of the block allocations can be found at this link along with details of the Finals weekend in NIHL 2 North and South. 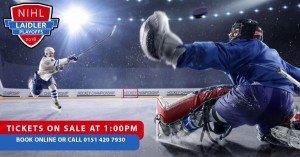 A weekend pass is £15 for adults and £8 for concession. 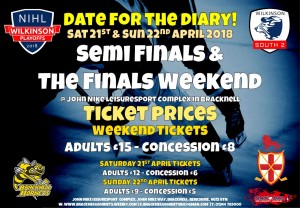 On the days itself, tickets will be on sale from the rink but for cash sales only.

All online bookings are subject to transaction fees at the time of purchase.