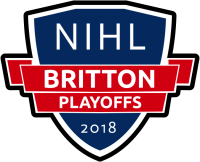 On Saturday March 24 in the NIHL Britton division playoff game between Swindon Wildcats and Peterborough Phantoms, Swindon iced a player who was not playoff eligible (NIHL RoC 8.4.1/had not played 25% of league games).

Therefore under NIHL RoC 8.6.1/Penalties, the game has been awarded 5-0 in favour of the Peterborough Phantoms.