The English Ice Hockey Association, National Ice Hockey League and Planet Ice Coventry are pleased to confirm tickets for the NIHL Final Four will be on sale from Tuesday 12th February. 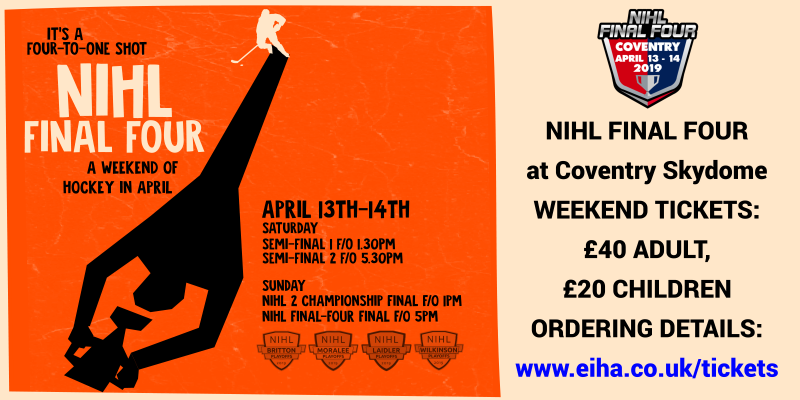 Tickets for the showpiece weekend at Coventry’s Skydome Arena are priced at £40 for adults, £30 for senior citizens and £20 for children (15 and under) and will be sold by the Skydome Box Office – telephone and online – initially with two selling windows each day for respective teams and their allocated blocks.

Wheelchair and carer tickets can only be purchased by telephone from the Skydome (02476 630693) on a first come first served basis.

All tickets are subject to a £1 booking fee and will be sent out by email.

All ticket booking information can be found at www.eiha.co.uk/tickets.

NIHL Final Four weekend will see the regional finalists from Moralee and Britton divisions playing crossover semi finals on Saturday April 13th. After doors open at noon, the semi finals are at 1.30pm and 5.30pm to determine our grand finalists.

On Sunday April 14th doors again open at noon before the respective winners of Laidler and Wilkinson will play at 1pm for the NIHL2 National Championship followed by the NIHL Final Four Championship match at 5pm.

Supporters of all NIHL teams are encouraged to attend this festival of National League hockey and celebrate the end of the season in style with passionate supporters from all over the country and four great games.

NIHL Final Four is part of the #NIHLChampionshipSeries which features divisional playoffs in Moralee and Britton divisions as well as playoff weekends at Widnes and Bracknell for Laider and Wilkinson over the weekend of April 20/21.

Follow @NIHLhockey on Twitter, or check out www.eiha.co.uk/nihl as the league title races reach their conclusion. Use the hashtags #oneNIHL #NIHLFinalFour #NIHLChampionshipSeries on your social media to join in the conversation.