NIHL: Cross-border battle for the North Cup as Warriors face off with Racers

The NIHL management group are delighted to confirm the arrangements for the 2020 North Cup Final, where Whitley Warriors will play Murrayfield Racers over two legs to decide the silverware.

Murrayfield Ice Rink will host the first leg of the final on Saturday February 22nd, with puck drop at 6pm. The return leg is at Whitley Bay Ice Rink on Sunday February 23rd, face-off at 5pm. 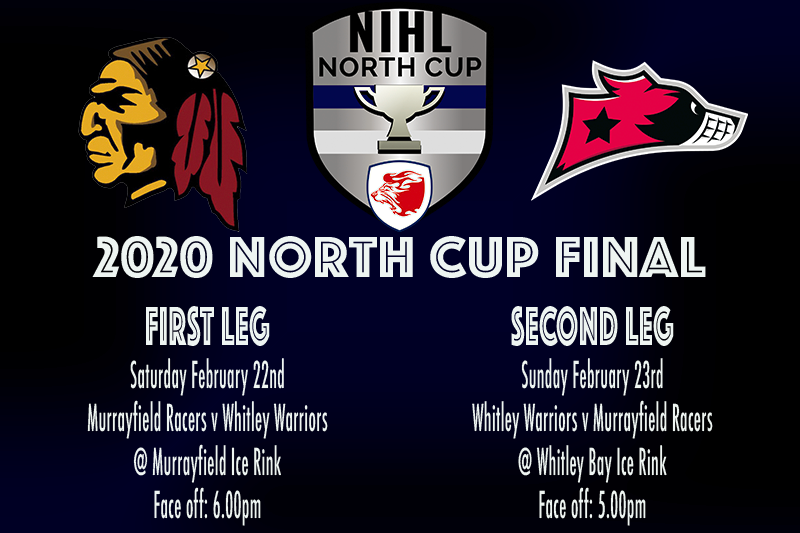 Whitley Warriors are chasing honours on all fronts in NIHL North this season and they saw off derby rival Billingham Stars in their two-legged semi final last weekend to book their spot in the Final. A 5-2 win on Teesside was followed by an 8-3 success at Hillheads making a 13-5 total score victory. Ticket details for Sunday’s second leg will be published on www.whitleywarriors.net.

Murrayfield Racers finished fourth in the qualifying group and faced league-leaders Solway Sharks in their semi final. A one-goal win for Solway in the first leg was overturned at a packed MIR on Sunday, with aggregate scores level in the final minute. Callum Boyd took a feed from behind the net and fired into the net with just 42 seconds left giving Racers a 10-9 aggregate win. Supporters should check www.mracers.com for ticket info ahead of the first leg.

An NIHLMG spokesman said: “Two iconic club names, both coached by iconic former players, what more could we want in a Cup Final? Whitley Warriors are chasing a trophy treble and are on a great run at the moment. They just kept rolling in their semi final against Billingham and were too strong for their local rival. We’re certain the away section at Murrayfield will be a sea of maroon and gold for the first leg tie.

“As for Murrayfield, they have made great strides in this year’s competition after making their debut last season. They pushed Solway close – twice – in the group stage, beat Whitley in the group stage so we knew they were capable. They were 3-1 up on Saturday and 3-0 ahead on Sunday and saw Solway fight back. The Racers rebounded on each occasion and snatched the win in the most dramatic fashion.

“We can’t wait to see David Longstaff and Tony Hand – both legends at club and national level – coach against each other over two hard fought games with some silverware on the line and the two rinks packed with passionate fans.”

To accommodate the North Cup Final second leg at Hillheads, the NIHLMG are grateful to Billingham Stars for agreeing to move their scheduled NIHL North 1 league game from February 23 to Sunday February 16 (5pm).