NIHL: Bison shutout Tigers to make it a trophy treble 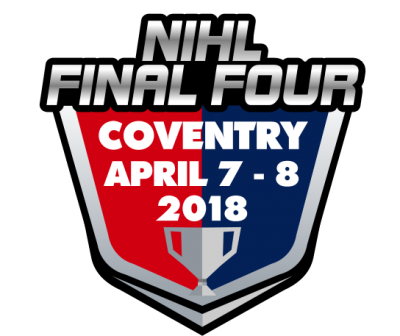 Basingstoke Bison completed a trophy treble in Coventry on Sunday, adding the NIHL Final Four to their league and playoff titles, beating Telford Tigers 4-0 in the Grand Final.

The National League’s first big weekend tournament saw impressive pre-sales for what is a new type of event for many of the clubs and their fans.  In the end almost all NIHL 1’s 19 sides were represented plus supporters from other clubs around the UK as well as the NIHL2 finalists Oxford and Sutton all getting a weekend hockey fix.

Bison edged out the north league winners Sheffield Steeldogs 3-1 in their Saturday semi final, a huge save from Dean Skinns on a Milan Kolena penalty shot when just a 2-1 game before captain Aaron Connolly added his hat-trick marker into the empty net to seal the win.

Telford’s ticket to the dance was stamped courtesy of a 4-1 semi final win over Peterborough Phantoms.  Scott McKenzie netted twice while Denis Bell made 14 third-period saves to prevent a Phantoms comeback.  Tigers fourth goal, McKenzie’s second, was into an empty net 74 seconds from time.

Sunday’s final began with Telford’s 19+2 bench against Bison only 13+2.  However when the puck dropped Basingstoke made light of the numerical disadvantage, a strong forecheck and speedy transition game causing problems for Telford from the off.

Bison capitalised on an early powerplay as Kurt Reynolds beat Denis Bell for the opener at 6.22 before Aaron Connolly bagged his fourth of the weekend before the first break.

The shot count of 13-4 confirmed Basingstoke dominance as Telford’s offence just would not or was not allowed to fire.

Another powerplay goal early in the middle frame from Josh Smith – being in the right place at the right time to put home a rebound – widened the gap further.  And how did the Bison man celebrate! 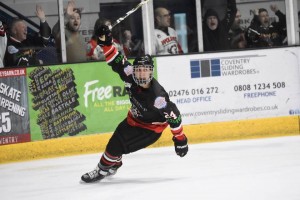 Eventual man of the match Ivan Antonov put the seal on the result with a clinical fourth just past the half hour and it was game, set, match and championship to Doug Sheppard’s Hampshire outfit.

The final shot count saw Bison hold Telford to just 15 shots on target in the game, testament to the way they shut down one of the most potent scoring teams in the NIHL.  The celebrations at the end showed what it meant to everyone in a black Bison jersey.

After captain Connolly lifted his third trophy of the season, coach Doug Sheppard spoke to EIHA.co.uk to give his reaction.

“I thought we were the better team throughout the game, but to be honest surprised at how good we were!  We have been good all year but I think we saved our best till last, the guys were phenomenal tonight.

“I don’t think anyone would have predicted three trophies at the start of the year especially starting out slowly as we did, but credit to everyone in the room they battled and came through when it mattered and finished off in the right fashion today.”

Reflecting across the weekend Sheppard added: “Aaron [Connolly] lead the way last night he’s been a tremendous leader for us, Skinnsy coming up big on the penalty shot. Tonight was a complete performance from the net out, Dean has been phenomenal in the playoffs and outstanding tonight, but every single guy on the ice just stepped up.

“The younger players like Paul Petts and Hallam Wilson don’t have a lot of experience but for them to come to Coventry and play their best games of the season is great to see.” 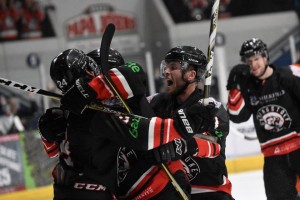 Talking of the support his side received from ‘Bison corner’ in the Skydome, Sheppard said: “Our fans have been amazing all year, sure they’ve had a lot to cheer these past few weeks but they stick with us through thick and thin and have been tremendous.”

Sheppard’s opposite number Tom Watkins was understandably low key after the game.

“There’s no worse way to end the season than to lose in the final game of the season,” he said.

“Credit to Basingstoke they fully deserved it.  We have no excuses, they are worthy champions.  It’s a horrible feeling knowing we didn’t give a good account of ourselves on the day but to quote someone else if you keep getting to finals the odds are you will win one!”

Reflecting on the past twelve months, Watkins said: “At the end of last season’s playoffs, the Tigers didn’t have a future.  We have overcome some huge challenges in the off season – we had to build a club from scratch, starting with no name and no logo. We persisted and built not one but two teams, put a team on the ice not only to compete, but who have challenged for a league and playoff title, and won some silverware along the way.

“We also have a team in next weekends D2 finals and an under 18 team chasing down a league title.  For that I’m proud of the Telford Tigers Ice Hockey Club.” 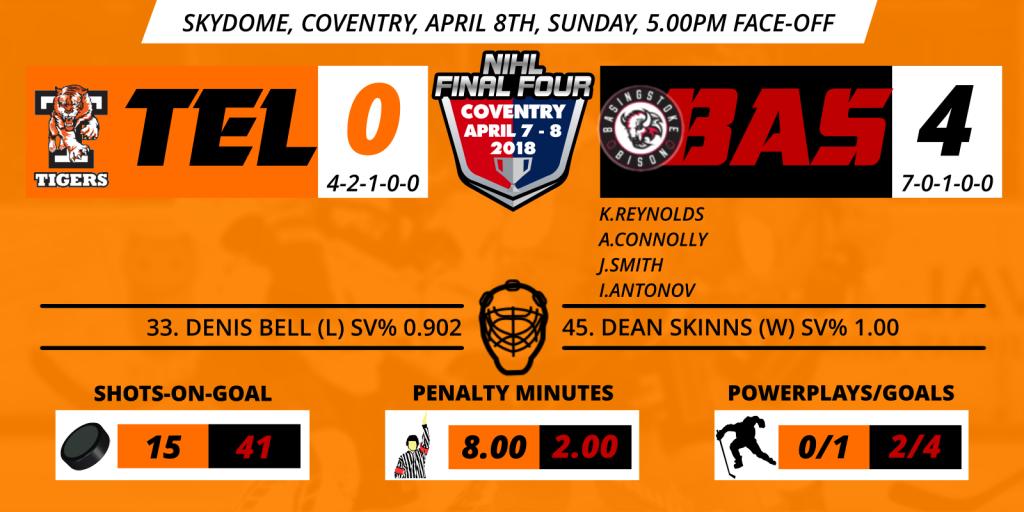