The finale to the EIHA women’s hockey season takes place this weekend as the Trophy Weekend – women’s hockey’s playoffs – returns to Ice Sheffield.

A total of fourteen teams have qualified for the weekend, taking part in ten games across the schedule for Elite League, Premier League, Division 1 and U16 title glory.

There are six semi finals on Saturday – two each for Elite League, Premier League and Division 1 – with those three Finals plus the U16 Final on Sunday.

Admission to the games is completely FREE although there will be some fundraising opportunities, supporting the EIHA and JLMC charity partner of Jack O’Donnell Foundation.

For the first time we are delighted to have 247.tv at Trophy Weekend and they will be webcasting all matches online – visit www.247.tv website to order the webcast at £3 per game.  Games will be available to watch afterwards on catch up, while DVDs can also be ordered for a permanent reminder. 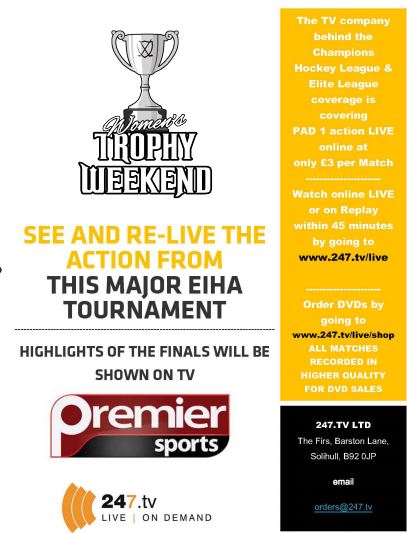 Action from the Trophy Weekend will also feature in a highlights package to be broadcast on Premier Sports later in the year.

MyTeamPhoto are also joining us as our official photographers.  They’ve worked with EIHA and JLMC at Junior Finals and Conference and their pictures are great quality and capture the spirit of the event perfectly.  MyTeamPhoto offer digital downloads as well as prints and mounts so visit their table on the concourse across the weekend to see what they can do for you.

Games begin at 9.45am on Saturday morning with the first Division 1 semi final, with play going on till around 8.30pm on Saturday night.  Sunday’s schedule begins at 10.35am and rounds off with the Bill Britton Trophy Final just before 5pm.

Women’s section chair Geoff Hemmerman said: “Trophy Weekend is a fantastic way to finish our season, with all teams coming together in Sheffield.  Since we moved to three divisions the Trophy Weekend has expanded and now is a true showpiece for our league and sport.

“The teams have battled through their league season and those who make it to Sheffield deserve their place.  Now it’s knockout hockey to win the final prize, the playoff trophy.  We welcome all teams, staff and supporters and hope everyone has a great weekend.

“Trophy Weekend games are being broadcast for the first time by our friends at 24/7 – they have done a great job for us with Juniors and Conference in recent years and we’re happy to bring women’s hockey to a wider audience.  Getting highlights on Premier Sports is also huge for the sport, and we’re grateful to 24/7 and Premier for giving us this opportunity.” 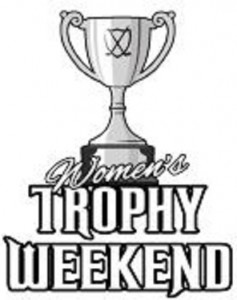