Sunday’s action – where all four finals took place – saw some thrilling games as the u16, Division 1, Premier League and Elite League trophies were awarded.

There was an added incentive as the D1 playoff winners would also be promoted to the Premier League for 17/18 season.

Bracknell jumped out to a 3-1 lead in the first and that remained the score until the final six minutes of regulation.  Jodie Attrill netted for Bison at 53.21 to make a one-goal game, but Bracknell snuffed out the comeback with a three goal burst in just 65 seconds to make the final score 6-2 to the Firebees. 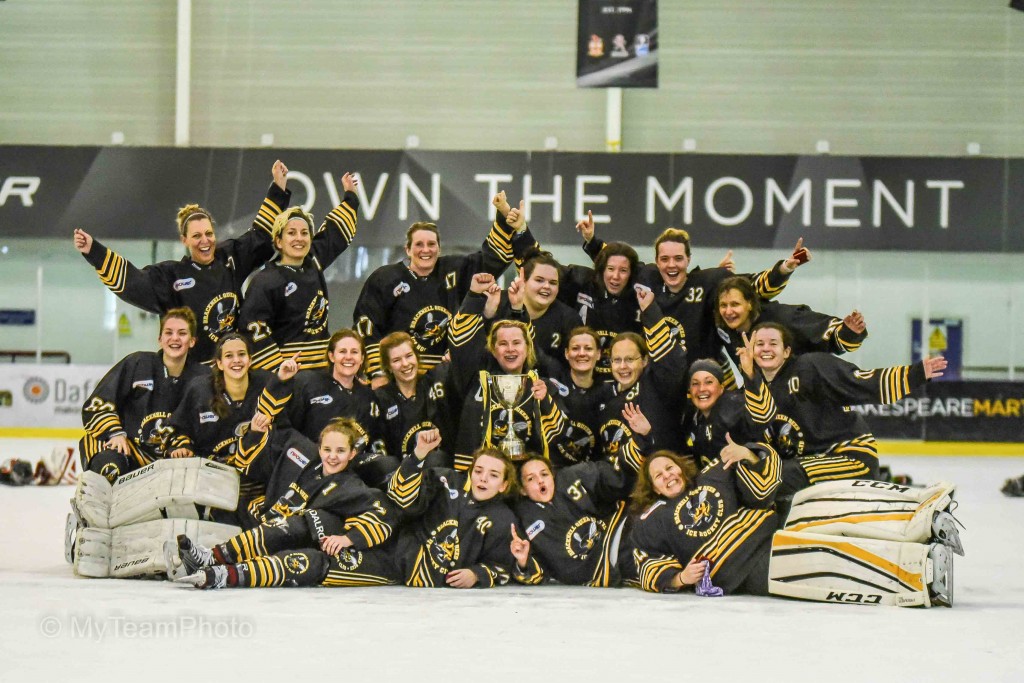 MK had the dream start, going up 2-0 early on in the first.  Streatham halved the lead in the middle frame with Jenn Lawrence solo effort and the Storm laid siege to the MK net for the remaining time, pulling the goalie in the last minute.  Falcons gained possession and Kirsten Noble managed to hold off two Storm players to score on the empty net and seal the win three seconds from time.  Streatham 1 MK 3 the final score. 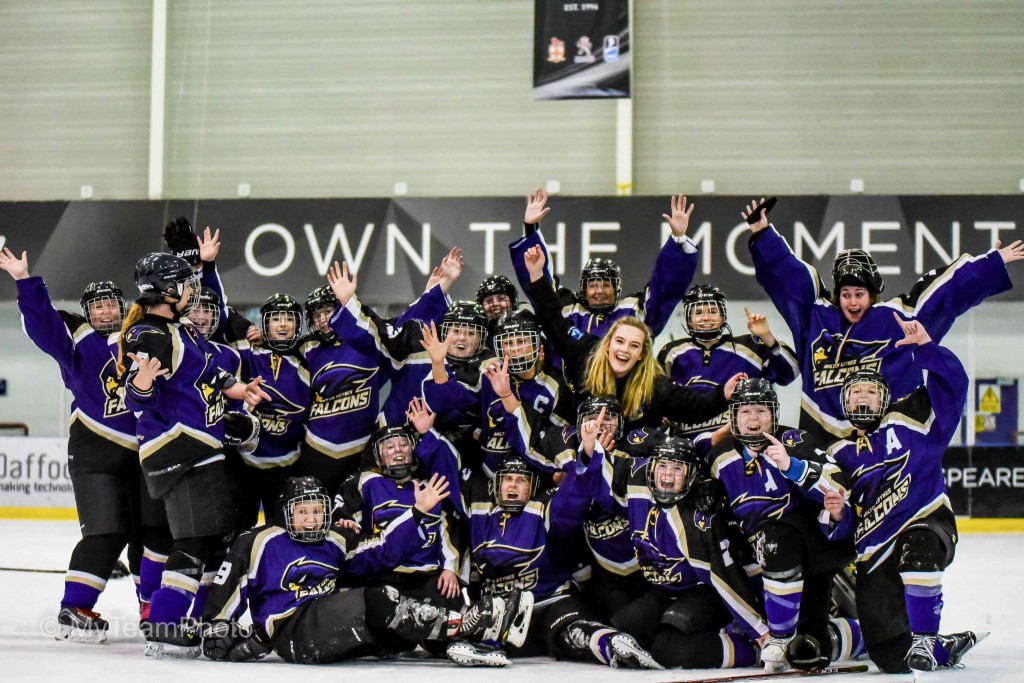 Game three on Super Sunday was the u16 final between the winners of the South and North leagues respectively.  Bracknell Ice Bees and Sheffield Shadows met for the second successive year, Ice Bees winning the first meeting comfortably last May.

Emily Harris and Charlotte Harris opened the scoring for Bracknell in the first period, and Ice Bees held their 2-0 lead at the first break.

Hannah Ware broke Sheffield’s duck with a goal five minutes into the middle frame to reduce the arrears to 2-1.  An end to end final period couldn’t produce any more goals and Ice Bees hung to claim the national title. 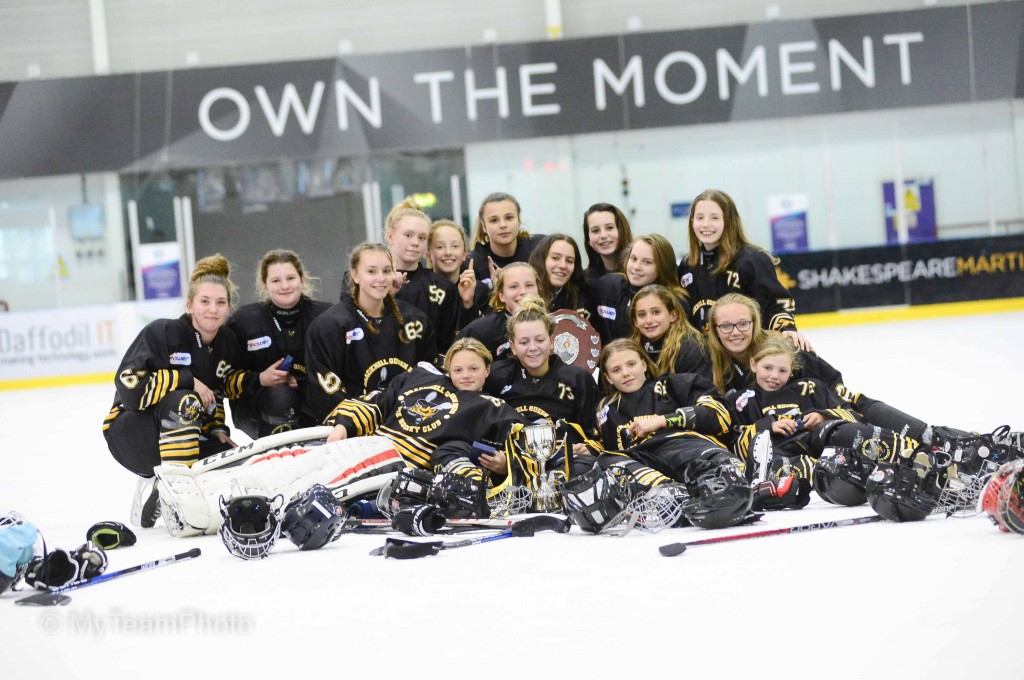 So to the final game of the weekend – Elite League final for the Bill Britton Trophy.  First against second as Bracknell Queen Bees faced off against Solihull Vixens.

Queen Bees had held off Kingston Diamonds 3-2 in their semi final – Bracknell had been 3-0 up after the first period.  Solihull had a more comfortable passage to the final, winning 7-1 over Guildford with Katie Henry bagging five goals.

The Elite Final started at a rollicking pace, and Solihull opened the scoring through Paige Henry.  Natalie Alridge replied shortly after for Bracknell, but Mariah Spare netted a second for the Vixens and they held the edge at the first break.

Into the middle session, and two goals in as many minutes from Solihull broke the game wide open.  First Cloe Keijzer netted a fabulous solo goal before Martina Krupkova made it 4-1 to Solihull.

Leanne Ganney netted shortside on GB teammate Michelle Franklin before the second buzzer and it as a two-goal game after 40 minutes.

Queen Bees – league winners six years on the bounce – threw pretty much everything at Solihull in the final period, and the pressure drew three or four penalties in quick succession including a four-minute PP.  But Vixens defence bent but did not break.

Eventually the pressure told and with just under two minutes remaining an almighty scramble around the Solihull net saw the puck forced home and it was a one goal game.  From the restart QBs gained the zone again and were able to get Lauren Relf to the bench for the extra attacker.

Solihull, though, repelled the attack and took the win 4-3 and captain Katie Henry lifted the Bill Britton Trophy. 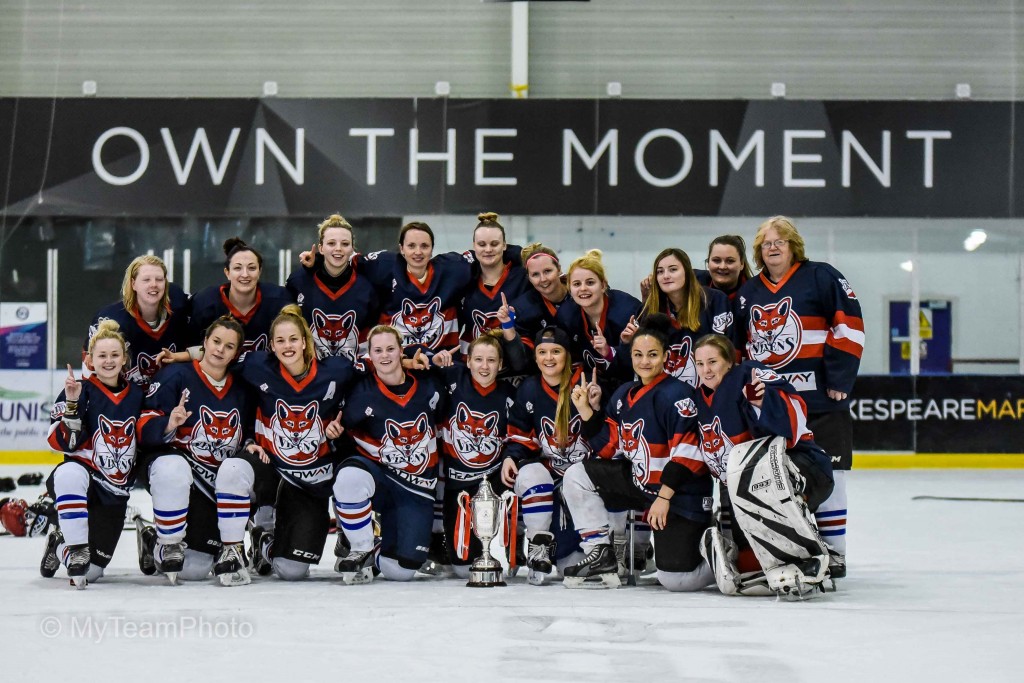 After the game, Vixens coach Reg Wilcox said: “Both teams played really well and I’m so proud of our team for getting the win.

“We had to soak up a lot of pressure and take our chances when they came back at us.

“The whole team deserves a huge pat on the back for digging out the win.  We’ve had a good series with Bracknell in the league and to turn it on in the big game at the end of the season is fantastic.

“It was a great team effort but special mention for our goalie [Michelle Franklin] particularly in the third period.  She made some big saves at key times.

“It’s June now, it’s been a long season so everyone is looking forward to a break then coming back in the autumn and look to defend our trophy next year.”

Action from the Trophy Weekend was filmed by 247.tv and a highlights programme will be broadcast on Premier Sports later in the year.  Viewers can watch games on catchup by visiting https://www.247.tv/live/ice-hockey/eiha-womens-trophy-weekend and ordering the game you want for £3 per game.  DVDs are also available from the 247.tv webshop.

MyTeamPhoto captured the still images over the weekend, including those used in this report, and the full gallery is online to view at their website.  Early orders attract a discount (expires 11.59pm Wednesday 7 June).