Last weekend a UK Prospects u11 team travelled to Bratislava to play in the EMF Under 12 tournament against teams from across Europe as well as a short pre-tournament camp for the squad.

On the ice the UKP side lost the three-game bronze medal playoff series against Netherlands by two games to one having played a total of 13 mini games in four days.

The coaching staff of Mark Saunders, Alan Hague and Alan Blyth give us their views on the UKP and the time in Slovakia. 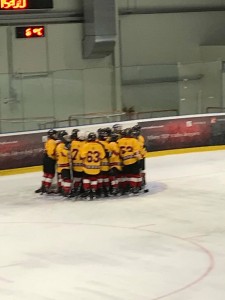 To summarise this trip in a few words would be very difficult, but with regards to ethos and philosophy it is clear to see that the UK Prospects U11 team was a huge success in a number of ways.

As Alan and Alan mention below, the selection process for these players was throughout the U11 Conference Series with each player showcasing themselves at at least two of the events.

After scoring from conference coaches, a final PO10 selection day and some thoughts over team selection we published a team of 23 from the 2007 birth year from the 150 eligible players which is who we took away to Slovakia.

Team performance was of a very high standard and as well as leading this event, I’m excited to see what these players can achieve as England U13 and Scotland U13 players in years to come.

With relevance to talent identification and growth of our game at younger ages, it is clear to me that this trip has provided many reasons to extend to look at younger age groups earlier to better prepare for our National teams.

All players, parents, staff and those involved at the EIHA for getting this trip off the ground should be commended, I’m proud to be a part of the direction we are heading in. 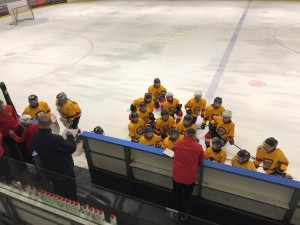 It was a great experience, competing against bigger and older teams but with teamwork and the young players wanting to learn really helps.

I think we saw was how all the kids talked and built friendships which helped them immensely, no player was left out.  This can take months – here it took a few hours and I think that helped how they played.

The process of selecting the team was a good one – over the Power of Ten events we saw all the players 2/3 times . In my opinion I would like to keep the core of the players with additions and take the team back again to the same tournament a year older, maybe have a few team training sessions which would also benefit the players.

It was also great for me working along side Mark and Alan – I learnt so much from them as experienced England coaches, they couldn’t do enough to teach and educate me, something which I could transfer to the kids.

The whole experience was amazing and I watched 23 young kids excel more than I expected, and they did the UK and the EIHA proud. 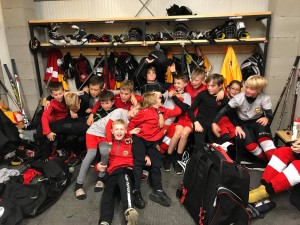 It was an amazing experience to be a part of. The whole process of the team selection from the PO10 events to the final product was fantastic. To be able to showcase that many players and create that final team was a huge honour to be a part of.

The players did themselves proud and the whole country should be proud of what they achieved. The ripple created by these players will now only grow and grow to something much bigger. I genuinely believe the “Kirky Effect” on these players will be massive. This has given them a new found belief that they can achieve if they believe.

The long days and short nights did not affect the players, they seemed to keep coming back for more. This was a very bright birth year and I am looking forward to seeing this group grow in years to come. Who knows, we might have just found ourselves another #189.