The second day of the NIHL Final Four in Coventry will see two national championships up for grabs.

There will be a couple of hundred supporters joining us for this NIHL2 championship and we hope they enjoy their sides’ battle but also stay with us for the full Final Four experience!

The Grand Final at 5pm has Telford Tigers against Basingstoke Bison.  The respective playoff winners from north and south won through their semi finals yesterday to earn the right to play for the title.

Telford saw off Peterborough Phantoms 4-1 in the first semi final.  Rick Plant opened the scoring in the first period for Telford before a brace of powerplay goals from Scott McKenzie and Macaulay Halford made it 3-0 Telford just past the half hour.

James White had Peterborough on the board in the 33rd minute with a sweet one-time finish, but Phantoms were unable to make further inroads into the deficit.

Telford iced the win 74 seconds from time when McKenzie bagged his second into an empty net, shooting the length of the ice to score. 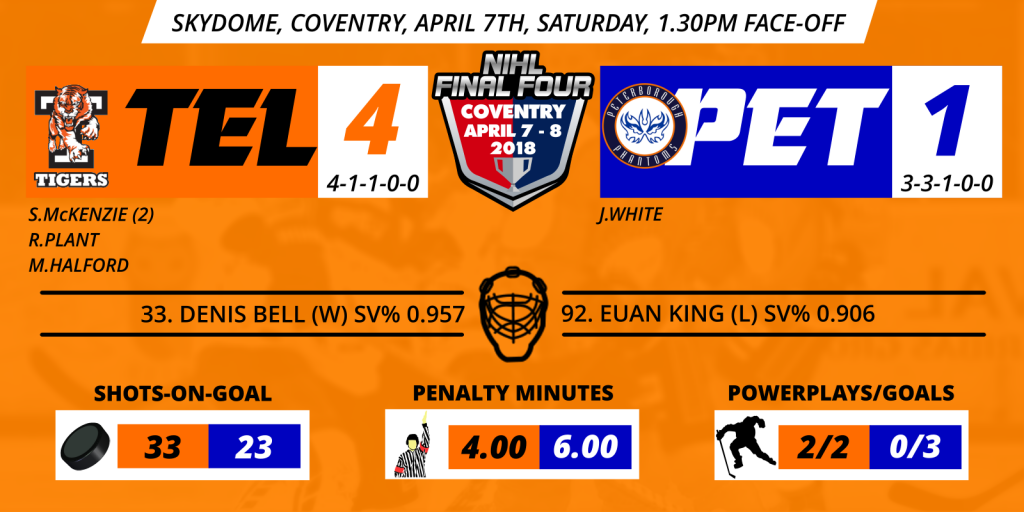 The second semi final was between the two league champions – Basingstoke from South 1 (Britton) against North 1 (Moralee) side Sheffield Steeldogs.

After a scoreless first period it was Sheffield who opened the scoring through Milan Kolena on 29 minutes.  Basingstoke captain Aaron Connolly, scorer of so many important goals this season, bagged the equaliser with a top shelf finish at 34.27.

Into the final frame, Connolly was on the mark again just over ten minutes from time to give Bison their first lead.  Sheffield pressed for a leveller and were awarded a penalty shot when Kolena was tripped on a shorthanded breakaway.

Kolena took the penalty shot, his slow deliberate skate forward did not though fool goalie Dean Skinns who made the save and kept the Bison ahead.

More late Sheffield pressure, this time with their goalie on the bench, saw desperate defence from the Bison before the puck was cleared and who else but Aaron Connolly skated into the Dogs zone and tapped the puck into the empty net for the insurance marker, his hat-trick goal. 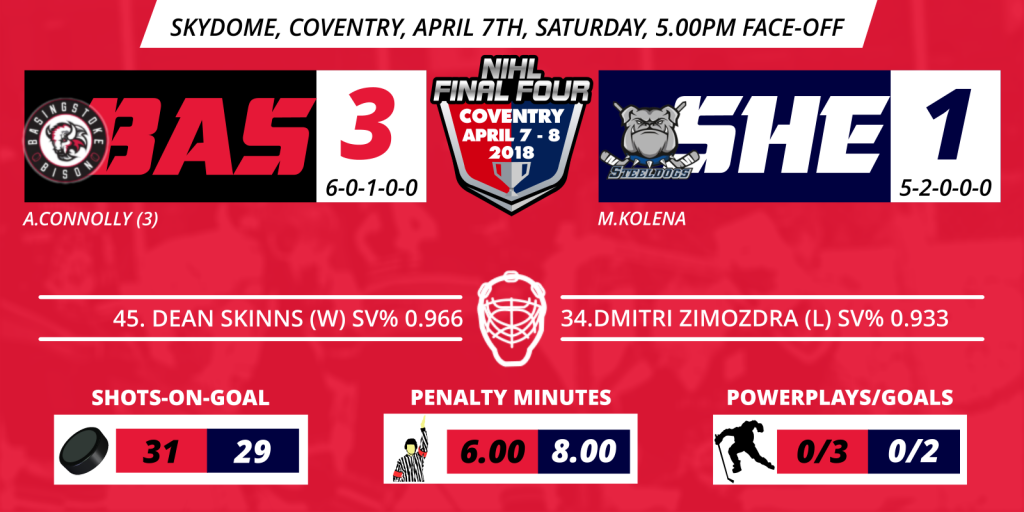 Thanks to David Strover (The_Strovinator on Twitter) for the game graphics.