NEWS: Streatham showing ‘Hockey Is For Everyone’ with Pride Tape this weekend

For hockey players, taping their stick is a very personal thing. Before practices and games, between periods, you can see players taking tape off, cleaning the blade then slowly, deliberately, meticulously applying the new tape.

While the style of the taping job differs wildy, the tape will be one of only two colours: white – traditionally used by defencemen; or black – used by forwards to disguise the release of a shot.

Until this weekend that is.

Their players will be using ‘Pride Tape’ on their sticks, showing support for the LGBTQ community, in their NIHL game against Milton Keynes Thunder this Sunday (October 8th).

The club have had to seek special permission to do this as the colours ordinarily violate the rule book, hence this is a UK first. We understand Melbourne Mustangs from Australia’s AIHL used the Pride Tape earlier this year.

The build up to the game will be used to show support for players, coaches and fans in the LGBTQ community, whilst also educating all groups about use of casual homophobia and transphobia in and around hockey.

Streatham Head Coach Jeremy Cornish explained why the club are getting involved.

“We had feedback from some of our supporters that we could help support the LGBTQ community. We have a diverse crowd of fans and we want everyone to feel welcome when they come to watch or play hockey,” he said.

“One of our sponsors, Stefanie Reines, helped us get hold of the Pride Tape from North America as it’s not available here in the UK. I’m really looking forward to the game against Milton Keynes and supporting such an important cause.

“Hockey players are creatures of habit and to see them using the tape in training last week was proof of the whole team’s willingness to support the LGBTQ community.” 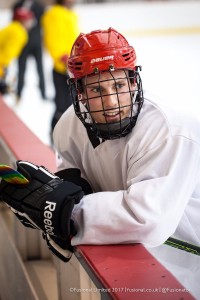 National Ice Hockey League Manager Richard Carpenter said: “I’m delighted to be able to approve the use of Pride Tape for Streatham IHC’s fixture against Milton Keynes Thunder. It’s superb to see NIHL sides and Streatham in particular taking a pro-active approach in showing support to the LGBTQ community and showing first hand that ice hockey is for everyone.”

Buying Pride Tape helps support LGBTQ youth outreach initiatives, such as You Can Play and the Institute for Sexual Minority Studies and Services based over in the US, however a number of UK retailers are currently looking at ways to stock it and promote UK based outreach programmes.

More information about Pride Tape can be found here: www.pridetape.com