The Bracknell Queen Bees clinched their SEVENTH successive league championship at the end of April.  And now this modern day hockey dynasty added to their achievements by completing the EIHA Women’s Elite League campaign with 19 wins from 19 games played.

Bracknell were founded in 1987 and have progressed from the Capital League, Southern League and up through the current EIHA structure – playing in the top division since 1990.  They have in recent years added the FireBees as their second team and the IceBees as their U16 team. 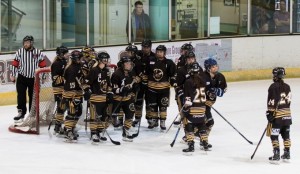 This year the Queen Bees opened with a rematch of last year’s Bill Britton Trophy final, where they overturned Solihull Vixens 4-3.  A home and home series win over Guildford Lightning had them up and running at the end of October, and the bandwagon kept on rolling.

Bracknell completed series sweep against rivals Solihull and after clinching the League title with a home double header against Sheffield and Streatham, the QBs maintained their unbeaten season with road wins at Kingston (5-1) and Guildford (10-5).

Chrissy Newman was club and league top scorer with 42 points in 19 games (29+13) and the QBs had five of the top ten league scorers.  Sam Bonathan between the pipes played every game and posted three shutouts and a.923 save percentage. 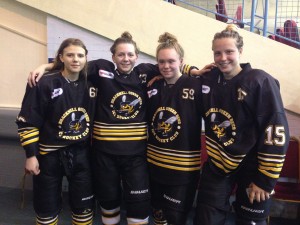 This coming weekend the Queen Bees head to Sheffield for the Women’s Trophy Weekend – the playoffs of EIHA women’s leagues – and face Kingston Diamonds in their Elite League semi final on Saturday afternoon.  They will be joined by their U16 side the Ice Bees who emulated the senior team by running through their U16 South division unbeaten and play Kingston’s U16 Diamonds in the Girls Final on Sunday afternoon.

The full Trophy Weekend schedule is shown below.  All games at Bauer Arena Ice Sheffield, with free admission in the arena for spectators.  All matches are also being streamed online by 247.tv with games available to purchase live or on demand afterwards.  Full details are on the 247.tv website.