Bracknell Queen Bees completed a second successive League and Trophy double at Widnes on Sunday, lifting the Bill Britton Trophy after a 4-1 win over Solihull Vixens and completing two full seasons unbeaten in the Elite League.

The 2019 Trophy Weekend took place at Planet Ice Widnes for the first time, and fourteen teams across four competitions played ten games over two days to round off the EIHA women’s domestic league season.

Other winners at Widnes were Chelmsford Cobras, Cardiff Comets and London Capitals.

Chelmsford lifted the Premier Trophy after a dramatic overtime win over WPL champions Nottingham Vipers. Cardiff Comets claimed the D1 Trophy and promotion to next season’s WPL, beating Swindon Topcats 4-2. London Capitals were a new team at Trophy Weekend, and they won the U16 Championship with a shootout win over Kingston Diamonds.

Saturday’s action at Widnes got underway with the first D1 semi final, North league winners Telford Wrekin Raiders going up against Cardiff Comets. After a scoreless first period, Cardiff opened the scoring with Olivia Taylor converting from Suzi Grieve’s pass at 18.49. That proved to be the winning goal as, despite Telford outshooting the Comets 33-16, Mackenzie Whilding in the Cardiff net saved everything, Telford couldn’t find an equaliser and it was the Comets through to the Trophy Final.

South league champions Swindon Topcats played Trophy newcomers Solway Sharks in the second D1 semi final. The Sharks were founded in 2013 on the back of the Women’s World Championships in Dumfries and they joined the EIHA Women’s Leagues for the 2014/15 season. Swindon were too strong on the day and a hat-trick for Katie Edgington lead the way for Topcats in an 8-0 win to book their place in the Trophy Final.

The D1 Trophy Final, which also carried the prize of promotion to the Premier League for 19/20, began at a pace. Cardiff netted at just 0.31 with Olivia Taylor, before Swindon responded at 1.19 through Sarah Rouse. Chances continued both ways until Taylor for Cardiff buried her second at 12.31 to restore the Comets’ lead before the first break.

Swindon raised the pressure on Cardiff in the middle frame, shots counted at 13-3 for the Topcats, but Whilding in the Cardiff net carried on from the previous day to keep Swindon at bay. Comets did extend their lead with a powerplay marker on the half hour, Taylor completing her hat-trick at 30.37.

The final period saw Topcats come straight out of the blocks and reduce the arrears at 41.00. Rachel Holland got the final touch past Whilding and it was a one goal game again. The shots continued, 18-4 in the period for Swindon, but they couldn’t find an equaliser. Late on after a time out, Swindon pulled goalie Amelia McGinlay for the extra attacker but Cardiff forced a turnover and Gemma Kellond fired from the neutral zone into the empty net to seal the win. 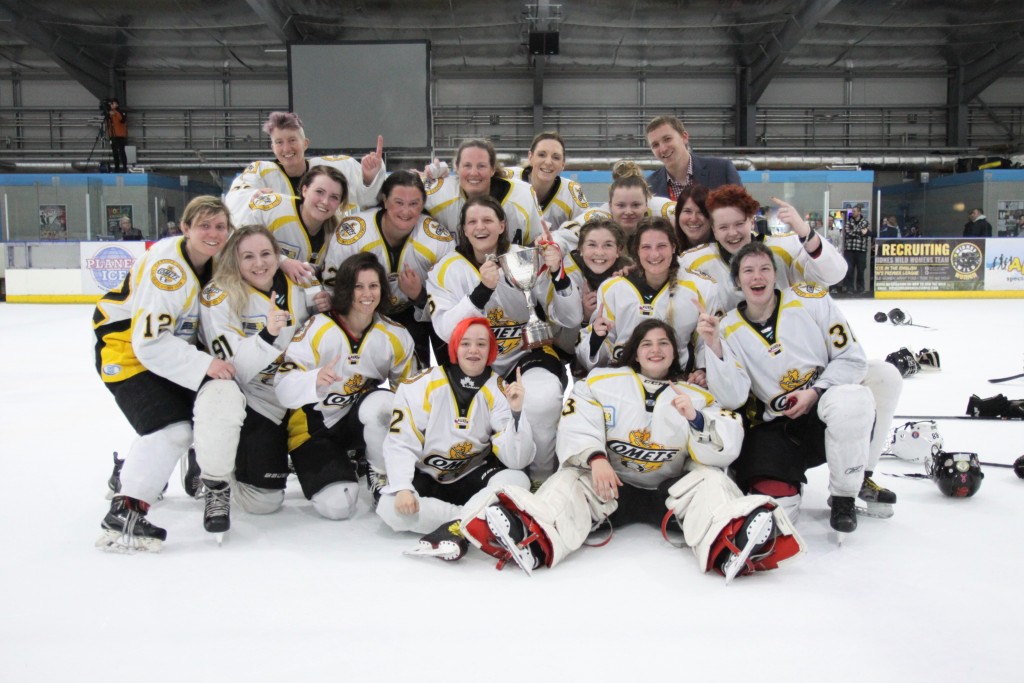 WPL champions Nottingham Lions opened their Trophy campaign against Kingston Diamonds in the first semi final. After a nervy opening from both sides, Nottingham opened their account at 9.15 through Megan Rathbone, and added two in a minute before the first break from Chamonix Jackson (12.57) and Rathbone again (13.58) for a comfortable lead. Vipers added three more in the middle frame from Robin Mullen, Madison Wright and Rathbone’s hat-trick marker, before Kingston made it on the board in the final period with Sophie Campbell’s powerplay tally completed the scoring.

The second Premier semi final saw Whitley Squaws take on Chelmsford Cobras. Squaws finished their WPL season as runners up, while Cobras were the only side to defeat Nottingham in the league, doing so on the last day of the season. It was Whitley who struck first in the tenth minute, Sally Hinton-Lewis finding the target. Steph Box then doubled the Squaws’ advantage at 20.15 with a smart wrap around finish. Chelmsford sprang into life early in the third and they tied the game with two goals just 14 seconds apart. Brittany Stoneman opened their account at 33.38 before Abbie Sylvester fired the first of a triple of long range bombs to tie the scores at 33.52. Whitley edged back in front thanks to Steph Towns’ goal at 35.21, only for Chelmsford to tie again at 42.20 – Sylvester with the powerplay rocket. Regulation time concluded at 3-3 so it was off to overtime to decide the finalist. Despite their short bench, Chelmsford dominated the chances in OT, with 4-0 shot count, the decisive moment at 47.57 as Sylvester wound up at the blue line again and fired high past Jessica Kinghorn to give the Cobras the win and a place in the final.

So to the Premier Trophy Final, Nottingham opened the scoring early as Robin Mullen’s shot crept in at the far post at 3.26. Chelmsford levelled before the first break, Abbie Sylvester’s fourth of the weekend tying the game at 16.47. The Vipers created numerous scoring chances throughout periods two and three, shots counted at 37-11 for the final 40 minutes but Chelmsford and Emma Nichols in particular held firm. One late Abbie Sylvester bomb rang the iron on Nottingham’s net but stayed out and it was off to bonus hockey for the second time in the weekend for Cobras.

Overtime was short and, in Chelmsford’s case, sweet. First shift saw Jen Bolton’s shot saved, Brittany Stoneman was first to react and she potted the rebound to win the game and the Premier Division Trophy belonged to Chelmsford Cobras. 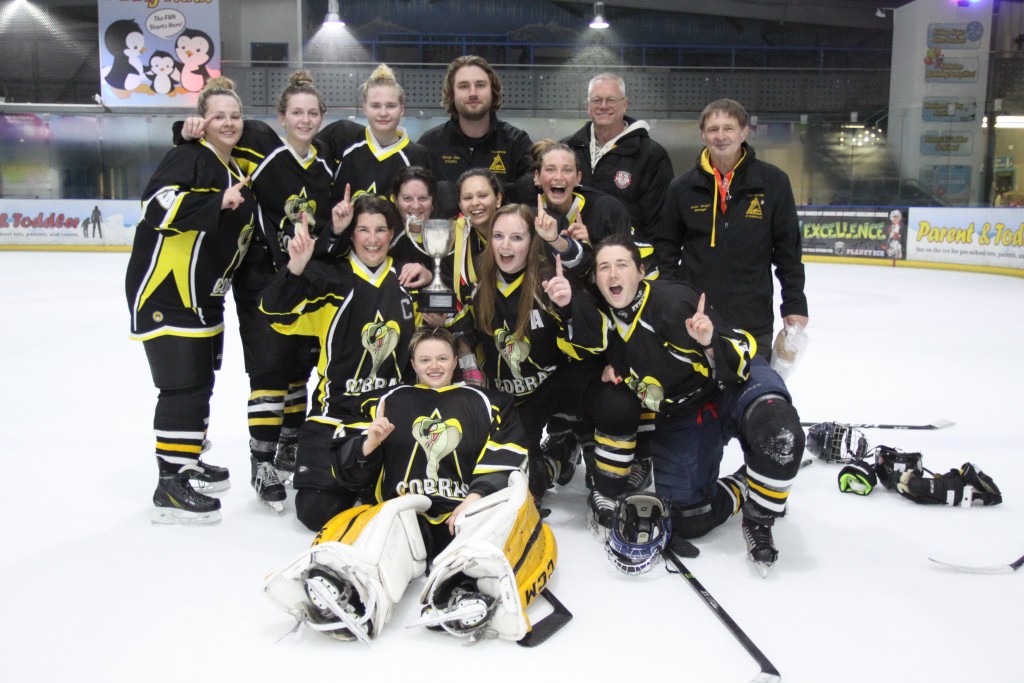 The traditional curtain raiser to the Elite Final, the u16 Girls National Championship sets the winners of the north and south divisions against each other. Since the competition began it has been Kingston Diamonds in the north and Bracknell Ice Bees in the south. That changed for the first time this year. Kingston qualified from the north division, holding off a strong challenge from Sheffield. The south had a new champion, however. London Capitals – based in Haringey but picking up players from clubs around the south east – beat the Ice Bees to the south division title and qualified for a Trophy Weekend debut.

Capitals showed no signs of nerves, jumping out to a 2-0 lead in the first period. Lydia Walsh opened the scoring at 5.01, with Alice Jones making it 2-0 at 12.21 for the London club. Kingston hit back before the first break with Martha Brown on target at 13.41.

A scoreless middle frame saw both sides with decent chances, and that continued into the final period with Kingston chasing the equaliser. Inside the final two minutes, Diamonds took advantage of an offensive draw and lifted goalie Courtney Smith for the extra skater. The gamble paid off as Inez Brannan forced the puck home after a scramble around the London net, goal at 43.37 and the title game was off to overtime.

London had to kill not one but two minor penalties in the extra period but they held out with Ella Howard making five OT saves, the extra period couldn’t provide a winner which meant a penalty shootout.

Goalies Howard and Smith held the upper hand as the first five shots were all saved. With the sixth effort, London’s third, captain Alice Jones went forehand-backhand and five hole to net the winner and secure the national title at the first attempt for London Capitals. 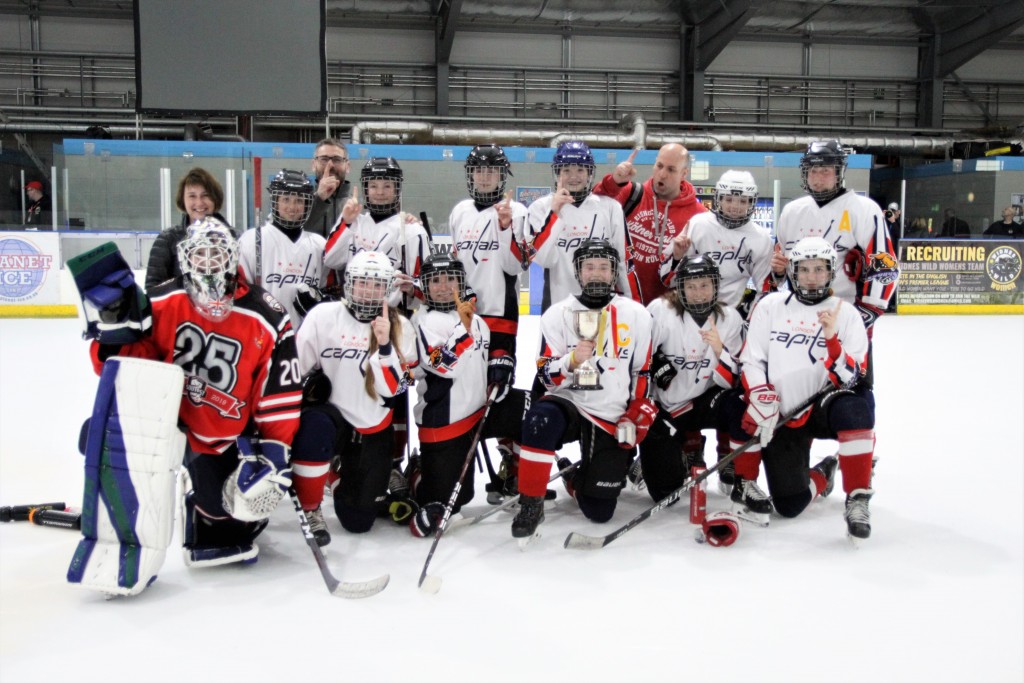 The top four sides in the EIHA’s Elite League played for the Bill Britton Memorial Trophy, Bracknell Queen Bees heading to Widnes as league champions for the eighth successive time and looking to repeat their Trophy win from 12 months ago.

First up the QBs faced Guildford Lightning in the semi final. Bracknell put on an absolute clinic, jumping out to a 6-1 lead at the first interval and a 10-1 final score. Emily Harris bagged a hat-trick alongside doubles from Chrissy Newman and Abbie Sylvester.

The second semi final pitched Solihull Vixens against Kingston Diamonds, the teams second and third in the standings. Vixens bagged a pair just 25 seconds apart in the first period to go 2-0 ahead. Katie Henry (11.17) and Jodie Bloom (11.42) were the players on target for Solihull. Saffron Allen scored the only goal of the middle period to make it 3-0 at the second break, before Kingston made it on the board from a Beth Scoon powerplay blast with the first play of the final period (40.15). Katie Henry put the seal on the win for Solihull ten minutes from time with her second and the team’s fourth, setting up a repeat of last year’s Trophy Final.

And so it came that the top two teams from the regular season face off in the season finale. Bracknell opened at a fast pace, firing 19 shots on Ella Howard in the first period alone. Vixens had to work harder to create their openings, going against Sam Bonathan who was played her final game before hanging up the skates.

Queen Bees got the only goal of the first period, Kim Lane’s wrist shot from the left circle finding the top right corner at 16.50.

In the middle frame Jodie Bloom got Solihull back on terms with a well-taken goal at 33.11 and the Trophy Final was down to a one period shootout.

Bracknell got the perfect start to period three, Abbie Sylvester netting a powerplay tally at 40.58 before Katherine Gale made it a two-goal lead at 47.51. Solihull looked for a way back, but QBs and Bonathan said no, a last minute PP gave Kim Lane the chance to pot her second of the game at 59.18 and time counted down on a second WEL and Trophy double for the Queen Bees.

Sam Bonathan collected the trophy and Bracknell celebrated the end of a second season without tasting defeat.

Women’s Leagues manager Sally Taylor said: “Congratulations to all of our winners this weekend. We had some amazing games with three overtimes and one shootout. Thank you to all of the teams, the players, officials and supporters for getting behind the event.

“Trophy Weekend received a warm welcome from Planet Ice Widnes, the staff couldn’t be more helpful and friendly. I thought there was a fabulous atmosphere all through the weekend.

“We hope everyone enjoys their summer and look forward to the 19/20 season getting underway in September.” 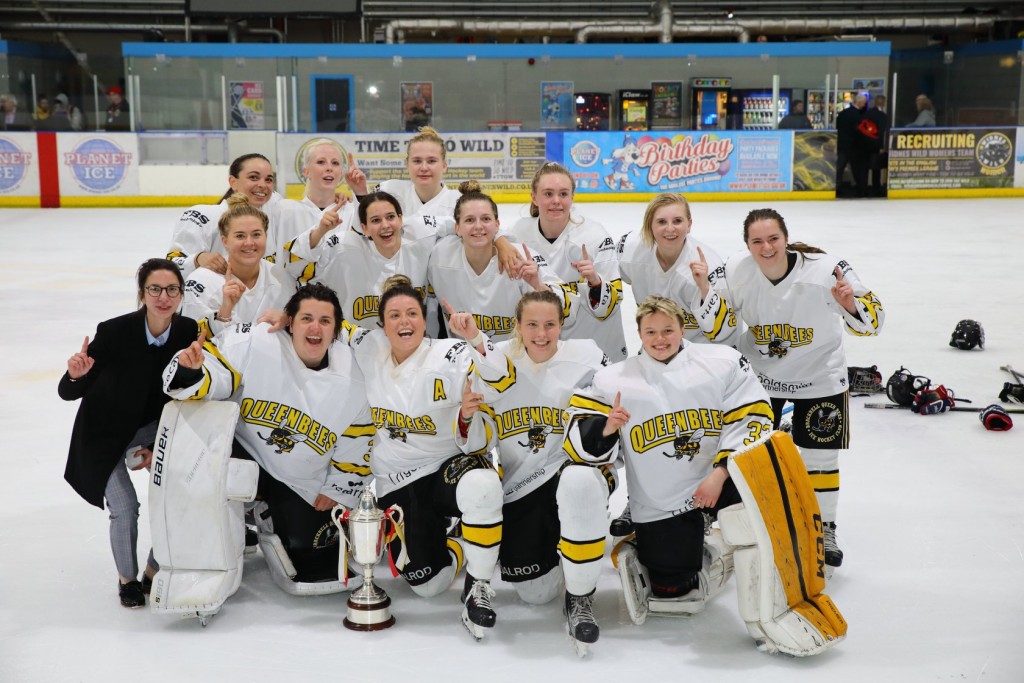 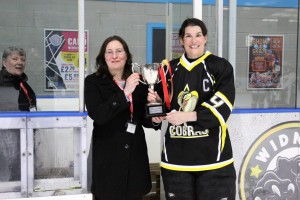 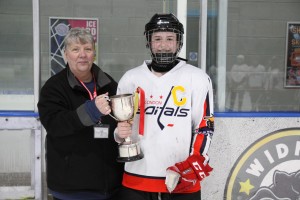 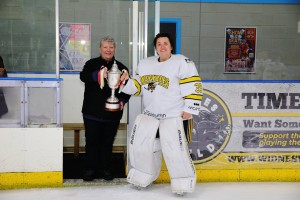