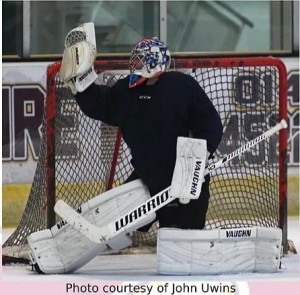 The NIHL South 2 club have announced that the 37 year old from Pizen, Czech Republic, has signed for the remainder of the current season and will make his debut this weekend.

Guildford Phoenix head coach Andy Hemmings said: “This is a massive signing for the Phoenix. Petr is a great guy who trains very hard and I can’t wait to see him make his debut.”

Guildford’s club head coach Milos Melicherik added: “We are very excited to have Petr join the Phoenix and look forward to seeing him in action this weekend.  He has improved a lot since he first took to the ice and I’m excited to see him play.”

As for the player himself, Cech said: “I am delighted to have the opportunity to play with the Phoenix and get the match experience.  I hope I can help this young team to achieve their goals for the season and try to win as many games as possible when I have the chance to play.

“After 20 years of professional football this is going to be a wonderful experience for me to play the game I loved to watch and play when I was a kid.”

Cech retains his daytime role with Chelsea FC as Technical and Performance Adviser.

He told the Chelsea website: “Some people seem to think I changed my job. No I didn’t. Luckily my job at Chelsea FC doesn’t stop me in my spare time from playing the game I loved as a kid which I’ve been playing for years.

“While being a professional footballer I couldn’t play the game for obvious reasons. Now I can.”

Cech is in line to make his Guildford Phoenix debut on Sunday, October 13, at home to Swindon Wildcats.  Face off at Guildford Spectrum is 5.30pm with tickets on the door priced £6 for adults and £2 for children.

For more information on the club visit https://www.gjihc.com/nihl2