NEWS: ‘Oddballs’ Player of the Month winners for November announced 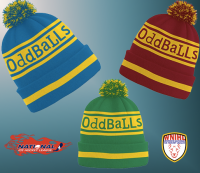 Each winner will receive an ‘Obble Hat’ courtesy of our friends at Oddballs.   Oddballs manufacture clothing and underwear for men, women and kids while at the same time raising funds and awareness for testicular cancer.

Check out the Oddballs ‘Christmas Collection’ online now and get yourself some ‘Oddballs’ for the festive period.

November’s NIHL National Player of the Month is DAN WELLER-EVANS.  In a run of starts this month, Weller-Evans won five of six games and posted save percent and goals against average among the top goalies in the league.

The Oddballs POTM for November is PHIL EDGAR.  In his third season with Whitley, Edgar has led the Hillheads outfit to Cup semi finals and top of the league, potting seven goals including a hat-trick against Solihull Barons.

The winner of the November award is VLADS VULKANOVS.  The Latvian hit the net in all six games, totalling 13 goals with two hat-tricks as the Aces push up towards the playoff spots.

November’s winner is CHRISTIAN COLE.  ‘Chico’ posted .918 save percentage in the month as Devils kept their unbeaten record at the top of a super-competitive title race.

The November winner is JOE BLISS. Mustangs were a perfect 6&0 in the month backed by Bliss’ 10 goals and nine helpers.

First of all in WNIHL, the Elite League player of the month is MEGAN BURTON (Solihull Vixens).  Megan made the step up to senior women’s hockey last season, asking if she could train with the Vixens.  Her focus and hard work got her noticed and she was offered a team spot at the start of 2019 and has been a regular team member ever since. Megan’s focus, work rate and dedication has not faltered or wained since and she has now become a stable, composed, mature and reliable top line D partner. The Vixens played 2 games in November, winning 5-4 and 6-0 with Megan not missing a shift and picking up a +- of +7 over the 2 games.

In the Premier League, the POTM is MYA HAREWOOD (Cardiff Comets).  As the youngest player on our team, Mya may be small, but she is mighty. In November we gained our first point in the Premier League in a draw against Chelmsford Cobras which Mya was integral for. She scored a fantastic hat-trick in the game – all unassisted – and was a force on the power plays. She truly stepped up to the challenge of this new league, and continues to be an inspiration for players new and old to the team.

For Division 1 South, the WNIHL POTM is JODIE ATTRILL (Slough Sirens).  Jodie has been voted in as captain this season and has been leading by example with great attitude both on and off of the ice. This includes assisting the coach by ensuring off ice warm up is undertaken and getting everyone mentally ready for the game. Jodie played a vital part in our win over Streatham this month as she has changed her style of play in which she lead the girls to work hard and get the win

Finally in Division 1 North, EMMA PEARSON (Widnes Wild) is the Player of the Month.  Emma had a hand in seven of the teams nine goals in the month, along with the encouragement given to beginner players on and off the ice as well as setting up off ice sessions for the players.  She does a large amount off the ice as well with managing the team Fixtures Live.

Congratulaions to all winners and nominees, the Oddballs ‘Obble’ hats are on their way.  Thanks to our friends at Oddballs for their continued support, visit www.myoddballs.com to view their full ranges for men, women and kids.