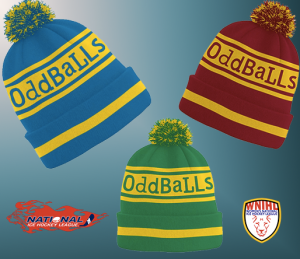 The October Players of the Month, presented in association with OddBalls will be announced tomorrow, Saturday, for both NIHL and WNIHL.  Each winner will receive a distinctive Obble Hat courtesy of OddBalls.

Today in advance of the winners being announced we are pleased to reveal the shortlists for the five NIHL divisions.  Check out EIHA.co.uk and club websites from 10am Saturday morning to find out the OddBalls winners for October.

Congratulations to all players shortlisted and thanks to OddBalls for their support of the awards.

OddBalls raise money and awareness of testicular cancer through their foundation and they have recently launched a new range of knitted obble hats as well as umbrellas and towels. Give their online store a visit at www.myoddballs.com and get yourself some distinctive merch while supporting our sponsor and a great charitable cause too.