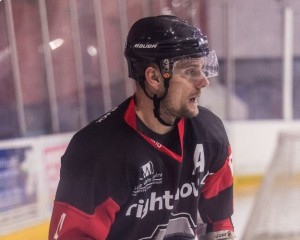 The National Ice Hockey League has today announced that the proceeds of the 50:50 draws at the NIHL Final Four weekend at Coventry on 13/14 April will be donated to the Ross Bowers appeal. These would usually be included in the net proceeds of the event and shared equally between all 18 Division 1 teams.

Bowers suffered an horrific eye injury last weekend while playing for MK Thunder in NIHL South 1. He has already undergone one surgery and has been informed that even after three or four more operations the best he can hope for in the damaged eye is to be able to tell if a light in a room is on or off.

An online appeal has so far raised over £18,000 while clubs all around the country are holding their own collections or other fundraising at games this and next weekend to add to the total. A number of NIHL teams have already made donations and others are planning special events up to and beyond the end of the season to raise more money for Ross..

The NIHL Final Four 50:50 net proceeds amounted to well over £2.000 last year and organisers would hope for more this time around. We are grateful to the clubs for agreeing to this gesture.

Everyone in the NIHL and the wider UK hockey family sends their love and best wishes to Ross, his girlfriend Nicola and daughter Ellie and we hope for as full and fast a recovery as possible.

The online appeal can be found at https://www.gofundme.com/ross-bowers