The NIHL North 2 regular league season concluded last weekend, however there were four games left unplayed for one reason or another.

LMC have looked into the circumstances and reached the following decisions.

Hull Jets v Widnes Wild – this is awarded to Widnes as a 5-0.  Teams are expected to be able to play on all weekend dates during the season given reasonable notice.  There was more than two months of the season remaining to fit in the game following the original date being changed, three dates were put to Hull when both sides were free to play and all were rejected.  Hull were asked to put forward any free date and failed to do so.

The results will be updated in Fixtures Live and will in turn update the league standings.

NIHL North league manager Gary Dent said: “Taking into account time constraints there was insufficient evidence to make an award to one team or another, though it should not be assumed that the LMC allocates equal blame when awarding 0-0.

“The subject of teams’ responsibilities to the league and other teams when it comes to fulfilment of fixtures will be the subject of discussion at the next section meeting.”

* NIHL North 2 season concludes with a four-team playoff weekend in Widnes on 14-15 April.  A limited number of standing tickets are available from the online box office. 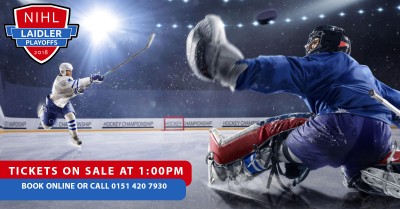