NEWS: Junior Finals once again show the very best from clubs across the country 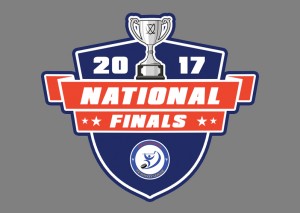 The JLMC National Junior Finals took place at Sheffield in the middle of May, with teams at u11, u13, u15 and u18 fighting it out across the weekend to be crowned National Champions having qualified via their respective leagues.

Thirteen games over the two days featured seven clubs bringing fourteen teams to the party – Sheffield lead the way with a team in each age group, while Chelmsford had three teams in the finals.

Saturday’s play featured the semi finals from the u11, u13 and u15 teams plus the u18 Final.  Sunday’s schedule had bronze medal games in the morning before the three grand finals in the afternoon.

Trafford and Chelmsford met in the first game of the weekend, the u11 semi final.  Connor Lee and Kurts Baumanis gave Trafford an early lead before Chelmsford came back.  Joe Tomalin and Lucas Marsh scored either side of the second break to level the scores at 2-2.  As time wound down Theo Warner lasered a shot from between the circles into the net for the game winner and a 3-2 Chelmsford win.

Swindon and Sheffield were the other u11 semi finalists.  Eddie Harper’s early double put Sheffield in control.  Euan Williams added a third before Swindon found the net through Tom Ashmore.  Sheffield had the final word, Lincoln Wake rounding off the scoring on a 4-1 result.

Sunday’s bronze medal game saw Swindon clinch the third place as six different scorers found the target against Trafford.  Alexander Blakeman had the last word with a successful penalty shot in the third period to end the scoring.

The u11 Final saw a dominant showing from Sheffield, an eventual 8-1 success giving them the National Championship.  Alexander Rushby and Eddie Harper both scored twice for the victors while Eden Rolfe netted Chelmsford’s lone reply. 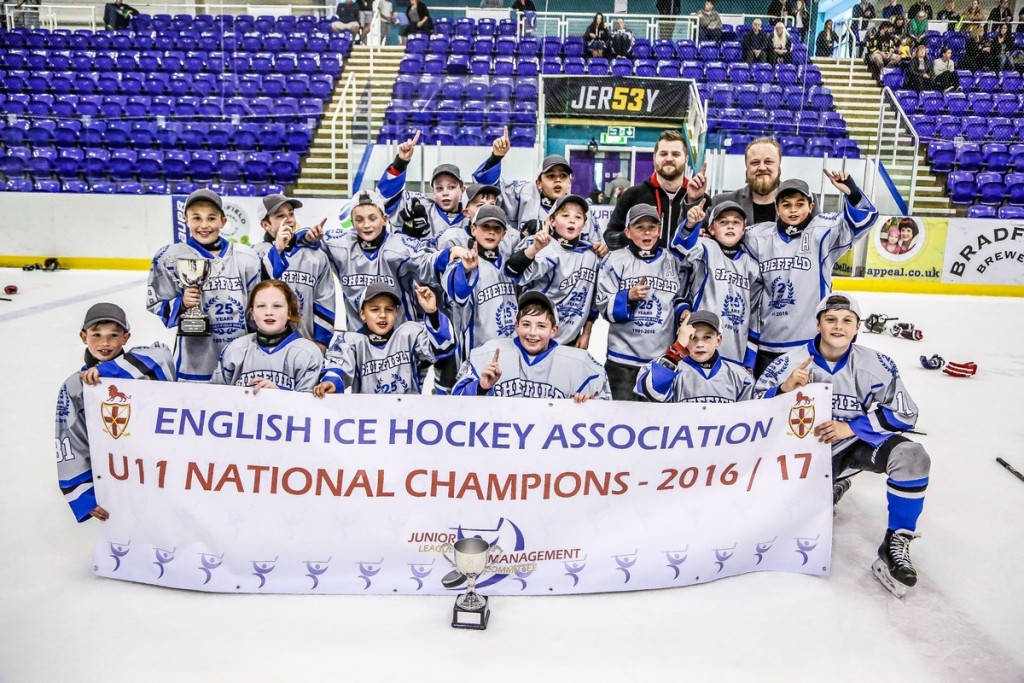 Sheffield and Chelmsford were the first semi finalists in the u13 division.  Callum Field lead the way for Sheffield with 2G+1A as the ‘home’ side clinched a place in the Final.  Isaac Tse and Eddie Harper put Sheffield 2-0 up at the first break before Field scored the only goal of the middle session on a powerplay.  Chelmsford made it onto the board through Joshua Fall but Kieran Chung and Field’s second made the game safe for Sheffield.

A classic game of two halves was served up by Nottingham and Swindon in the other half of the u13 draw.  Nottingham powered to a 4-0 lead before the 20 minute mark but were left hanging on as Swindon came back with three goals and threaten overtime.  A Jack Hopkins hat-trick and a single from Archie Hazeldine made it look like plain sailing for Nottingham, 19.22 played and up by 4-0.  Aidan McGurk opened Swindon’s account before the break, and doubled the tally in the last minute of period two to make it a two goal game.  Joshua Shaw set up a grandstand finish with Swindon’s third goal five minutes from time but Nottingham held on and took their place in the Final.

The u13 bronze medal game was an all-female goalie duel – Mali Easton just coming out on top of Emma Nichols.  Aidan McGurk’s 21st minute goal stood as the game-winner before a last second empty netter from Joshua Shaw iced the result for Swindon with a 2-0 success and third place.

Sheffield dominated their midlands conference rivals Nottingham with a resounding 8-2 win in the u13 Final.  Isaac Tse scored four times, Callum Field added a hat-trick in the win for Sheffield.  They had five powerplay and one shorthanded goal to tell the story of the  clinical performance to be crowned National Champions. 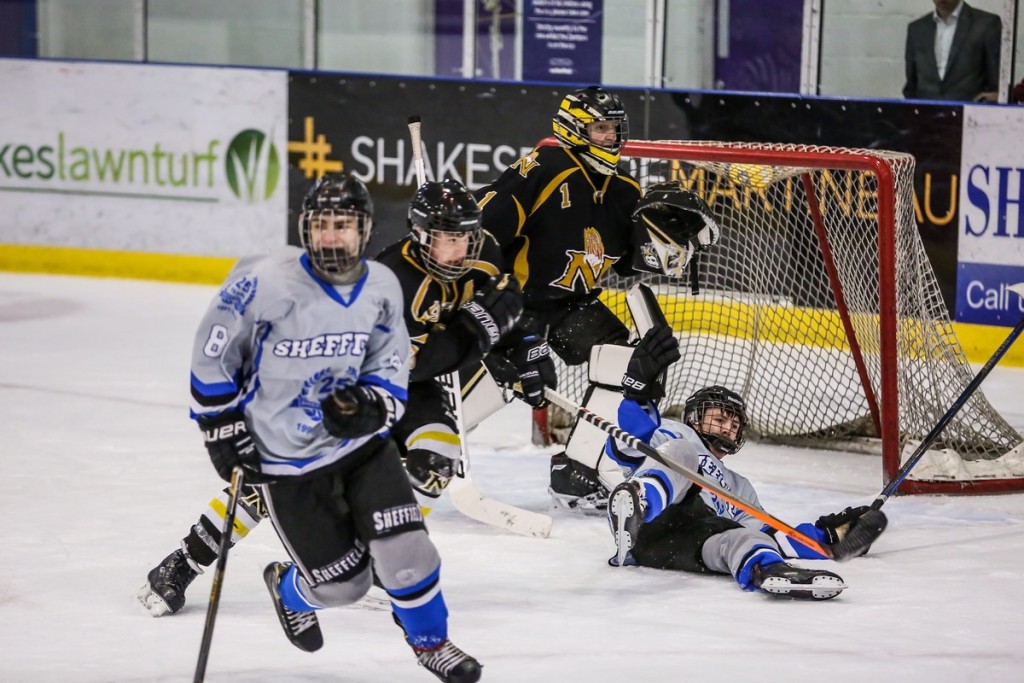 Peterborough pulled off a huge win in the first semi final, defeating Sheffield 8-2, Bradley Bowering and Jarvis Hunt both picking up four points (2G+2A).  The game was tied 2-2 in the 18th minute before Peterborough exploded for six unanswered goals to take their place in the Final.

Chelmsford captain Tommy Huggett had a hand in all four of his side’s goals (1G+3A) as they beat Nottingham in the other semi final.  Logan Neilson opened the scoring for Nottingham before Ewen Hill and Matas Bajorunas hit back for Chlemsford before the first interval. After a scoreless middle frame, Adam Coe and Huggett sealed the win with third period goals.

The two Midlands rivals served up a see-saw classic in the bronze medal match before Sheffield clinched the win over Nottingham in the last minute of regulation time.  William Newcombe and William Harper opened the scoring in period two, scoring just 16 seconds apart, before Bailey Challans got Nottingham on the board at 19.10.  In period three the sides combined for five goals in seven minutes to be level at 4-4 as time wound down.  Nathan Ripley popped up with a powerplay winner at 44.25 to give Sheffield the third place honours.

Peterborough overturned two heavy regular season losses to beat Chelmsford 3-1 and lift the Under 15 National Championship.  Peterborough had a dream start with Jarvis Hunt scoring just 25 seconds into the Final.  Ross Clarke made it 2-0 in the 19th minute, while at the other end Luke Clark in net was on stellar form – finishing with 29 saves from 30 shots.  Chelmsford were in with a shout at 38.48 as Tommy Huggett netted on the powerplay, but Hunt added an empty net goal 20 seconds from time to seal Peterborough’s title success.

Okanagan Academy completed a domestic triple crown, winning the National Championship against Sheffield.  Hector Lioud posted a shutout in a 3-0 win, OHA adding the Championship to the South League and Rob Laidler Plate.  Ironically the Plate was also won 3-0 over Sheffield.  In the Final, Ilija Kolosnicins netted a powerplay goal at 23.09 to break the deadlock, and it would stand as the game winner.  A pair of shorthanded goals from Matthew Byron and Michael Power completed the scoring. 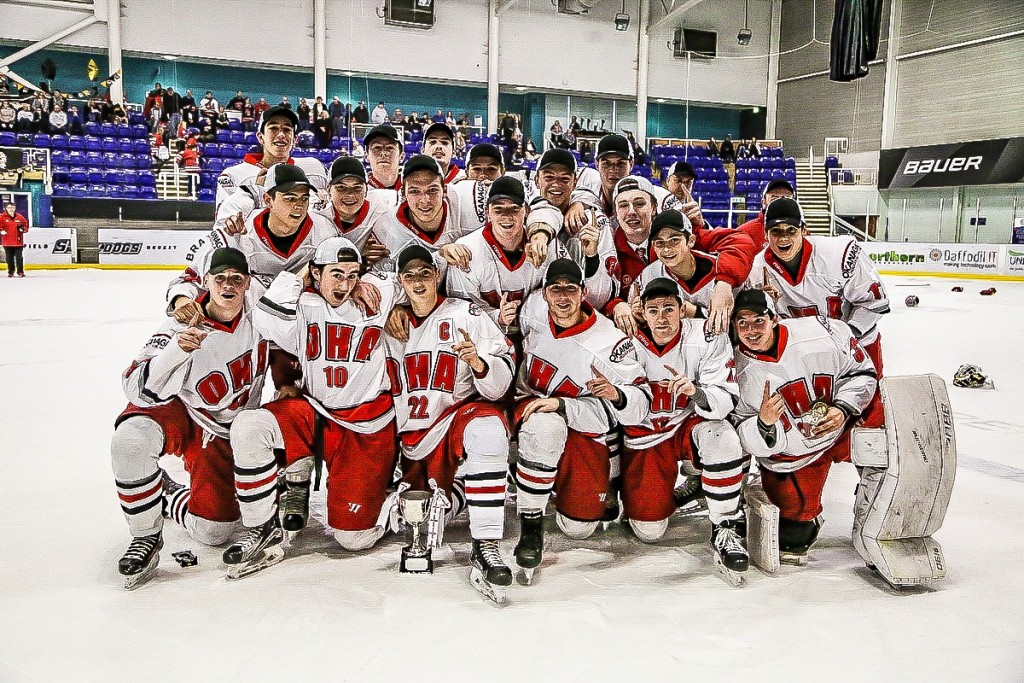 JLMC Chair Jacqueline Pye said: “A huge congratulations to our four National Champions – the hockey once again was of a fantastic standard and it was well supported by family and friends for all of the games.

“It was good to see teams making a first appearance at Junior Finals as well as the traditional attendees, and I hope the clubs take the experience of the weekend away with them and work hard next season to try and repeat that achievement.

“Off the ice we also continued our fundraising for Jack O’Donnell Foundation, the JLMC charity partner this year, so a big thank you to everyone who bought a programme or a ticket or a cupcake.  There’s more fundraising to be done at Conference, but we’re well on our way to a fantastic total for a great charity.” 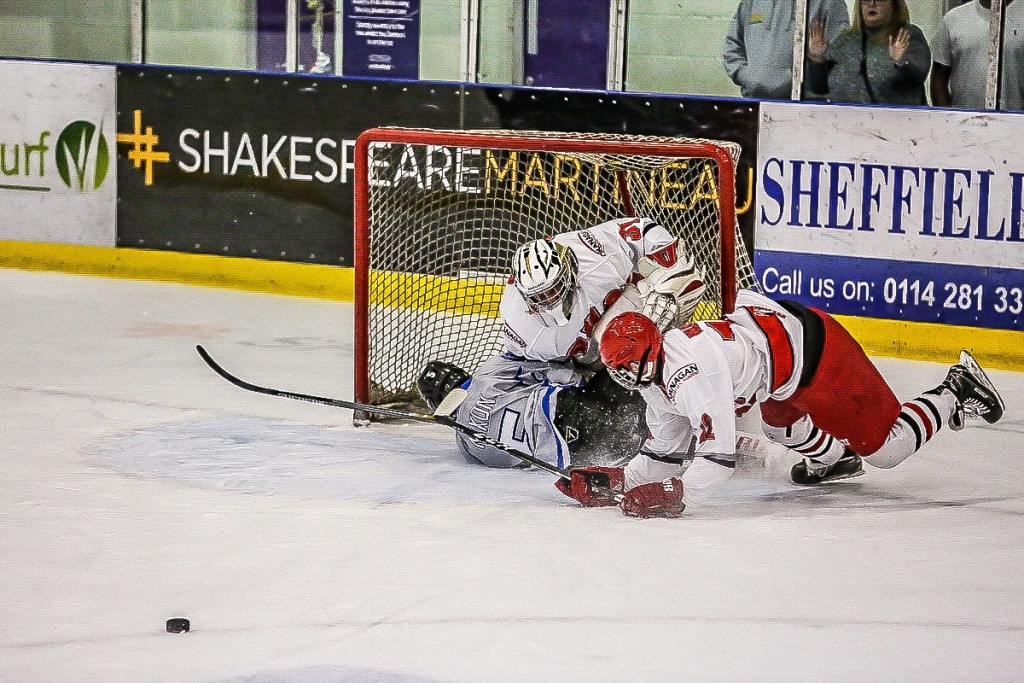 All games were filmed and streamed by 247.tv and will feature on Premier Sports later in the year.  Webcasts can still be ordered to view again or DVDs for a permanent memory – order via the 247.tv website