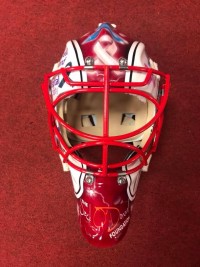 A goalie’s mask design is a very personal thing.  Whether it’s family names, in-jokes, cartoon characters, nicknames – the paint job stays with the player for at least the season, sometimes longer.

Jordan Lawday put up several top drawer performances last year guarding the Cardiff Fire net in NIHL South 1.  This coming season he will also be one to watch because of his head gear.

The former Basingstoke junior, who has backstopped Great Britain at U18 and U20, has commissioned a new mask from Anarchy Airbrushing, featuring the logos of Great Ormond Street Hospital, the Jack O’Donnell Foundation, Humboldt Broncos, My Turn Scott Matzka and cancer research ribbons.

Lawday has opened a Just Giving page to raise funds for those charities but also give donors the chance to win the actual mask at the end of the 18/19 season.

Every £5 donated will equate to one ticket in the draw, which will be made on Facebook Live at the end of next season.

The Just Giving page can be found at https://www.justgiving.com/crowdfunding/charity-goalie-mask and donations are open now.

Lawday said: “I’m pumped with how the finished mask looks, Colin Lees at Anarchy Airbrushing has done an amazing job.

“The donation page is live and the funds will be shared equally between the charities.  At the end of the season I’ll draw one donor at random and they will win the mask.” 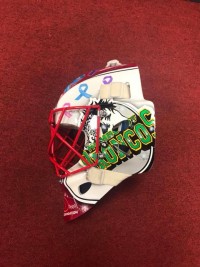 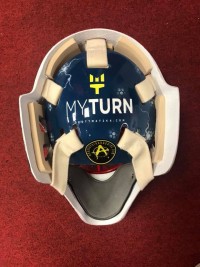 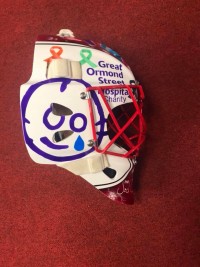