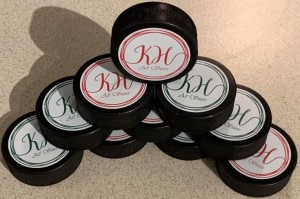 Great Britain women players past and present will be at Oxford Ice Rink on Sunday December 29th for a very special charity game in support of sports therapist Kirsty Hopgood who is undergoing treatment for osteosarcoma – a type of bone cancer.

Kirsty supported the England programme before moving to work with the Great Britain women – both U18 and senior teams.  When news of her diagnosis came out a group of GB players had the idea of a fundraising game and set about contacting players who had been in the programme while Kirsty was involved.

One of the organisers, Saffron Allen, picks up the story.

“I first met Kirsty when I had the honour of a GB under 18 selection in 2011, she supported us through various tournaments including a very busy one for her in Asiago where it seemed the whole team picked up injuries!

“Kirsty has also supported me in various senior GB tournaments including the trip to China in 2012 where she helped to get me safely to a hospital with a serious back injury.

“She is one of the reasons and inspirations for me choosing to study as a Sport Therapist and was actually one of my lecturers at Uni.”

Saffron and her fellow organisers Jodie Bloom, Louise Adams and Beth Scoon had the idea of a charity game and soon set about contacting players to recruit the teams.

“As soon as we started sharing our plan with the rest of our GB colleagues and asking their thoughts, names of players past and present, UK based and abroad, came bouncing back with one common message – ‘count me in, I want to be a part of this!’

“Equally we didn’t need to ask for bench officials as coaches that previously worked with Kirsty came forward in a flash.”

The quartet then set about the work of organising the game and associated things like jerseys, player shirts, T-shirts, big game tickets, raffle tickets and prizes

“There was so much to do to put the game on,” said Allen.  “Normally we just turn up and play!  But everyone has been great donating their time and making sure everything is done to help raise as much money as possible.”

There is an auction running on the main Facebook page (Kirsty Hopgood’s All Stars) selling the players’ and coaches’ game jerseys which were designed and donated by Rhino Sports – bids can be made by e-mailing kerry1693@hotmail.com and the page us kept up to date with latest bids.

There are also T-shirts available (printed with the game logo and the Osteosarcoma ribbon) also from Facebook page at a cost of £10.

The raffle is also now up and running – tickets cost £2 per ticket or £10 per book. Message the page and organisers will be in touch to sort everything. There are a number of fantastic prizes donated to the cause including tickets to the GB vs Canada game, a suite at a Sheffield Steelers game, a VIP day at a Murrayfield game, the list goes on.

On the day itself admission is by donation and as well as the game itself there will be raffle tickets available, as will scratch cards and various other activities as well as a merchandise table selling the T-shirts, a lovely selection of GB embroidered items which were donated with the T-shirts by Mowbray Sports and a souvenir programme featuring a small write up from all players and bench staff as well as some words from Kirsty amongst other bits.

Organisers hope that Kirsty will be able to conduct the ceremonial face off at pre-game but this will depend on how she is and her hospital dates. 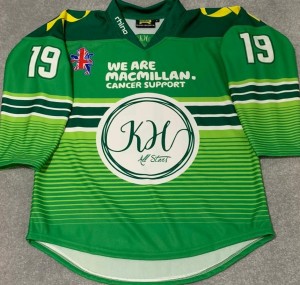 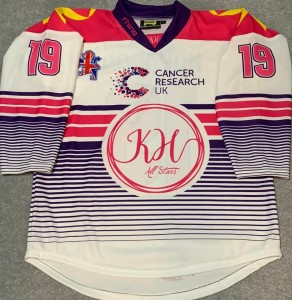 Organisers can be contacted via the event Facebook page – https://www.facebook.com/kirstysallstars

Donations can be made online via GoFundMe – https://www.gofundme.com/f/kirstys-all-stars