The first event in an expanded competition for the UK’s best U11 players takes place on Saturday at Dumfries Ice Bowl as the U11 Conference Series begins. 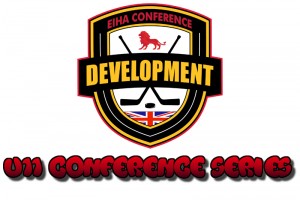 Traditionally the Conference sides – four English regions plus a Scottish Conference – only play competitively at the season ending tournament in May.  Now the EIHA and SIH have formulated the U11 Conference Series to increase the level of competition for the players – they will meet three times in full day tournaments before May’s finale at Conference Weekend.

The action gets underway at 0645 on Saturday morning with the first of ten matches – 3×15-minute period games – and rolls through until around 1830 in the evening when the hooter sounds on the final game of the round robin competition.

However the day doesn’t end there – following the Conference Series, the Ice Bowl’s senior club Solway Sharks are playing their National Ice Hockey League game against Deeside Dragons which faces off at 7pm.

The JLMC are grateful to the Sharks management for their generous offer and hope players and parents will take advantage to watch the senior side in action.

Sharks head coach Martin Grubb said: “Everyone at the Ice Bowl is delighted to be hosting the first U11 Conference Series event.  We look forward to seeing some future talent on the ice during the day and having the players as our guests in the evening to watch the National League game.”

JLMC Chair Jacqueline Pye said: “We’re all excited for this first U11 series and can’t wait for the games to start.

“This is a new event for us and everyone in EIHA and SIH is confident it’s the right way to go for development of our younger players.  More competition against better players throughout the season, still ending up with the showcase that is Conference Weekend.”

Admission for spectators at U11 Conference Series in Dumfries is FREE.

Further events will take place in January and March 2018.