NEWS: Double trophy joy for Sheffield; titles for Nottingham and Streatham at #nationals19

The JLMC National Finals concluded on Bank Holiday Monday, crowning four new champions at u11, u13, u15 and u18 ages.

Ice Sheffield’s Bauer Arena was home for 27 games across the weekend bringing the best junior teams in the country under one roof.

The u11 competition once again featured an extended round robin with eight teams taking part, initially playing in two groups of four.  The top two sides from the round robin played in the semi finals.  Sheffield Thunder, Manchester Storm, Cardiff Jr Devils and Guildford Fireflies were the final four.  Sheffield beat Cardiff 4-2, while Guildford edged Manchester 3-1.

After a scoreless first period, Sheffield opened the scoring early in period 2, Joshua Hartley bagging the goal.  There was no further scoring until the first two shifts of the final frame.  Sheffield made it 2-0 from Alexander Rushby, before Harry Illingworth put the icing on the result with a third a minute later.  Guildford Fireflies battled to the very end but Sheffield held on to take the u11 championship. 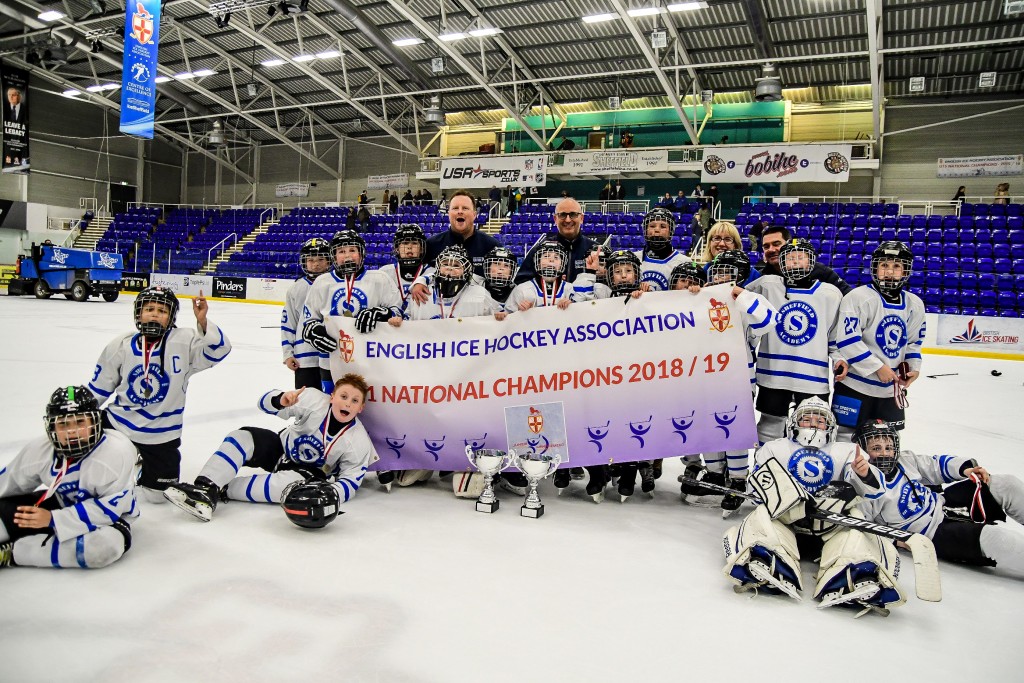 Swindon Pumas, Sheffield Lasers, Nottingham Tiger Cubs and Streatham were the qualifiers from the leagues, playing cross over semi finals (North 1 v South 2 and vice versa).  Swindon and Sheffield went to overtime with the Pumas winning 4-3 while Nottingham held off Streatham 2-0.  The bronze medal match saw Streatham win 2-1 over Sheffield.

Monday’s final saw Swindon take a first period lead, Alfie Druett on target at 11.15.  The Tiger Cubs dominated the shot count but found Ben Clarke-Leach in top form, making 36 saves.  Nottingham finally found an equaliser at 32.32 through Henry Newell but that was the end of regulation scoring.  Into overtime, both sides had chances before Nottingham’s Oliver Turner had a shot sneak through at the near post 3.48 into bonus time and the Tiger Cubs were champions! 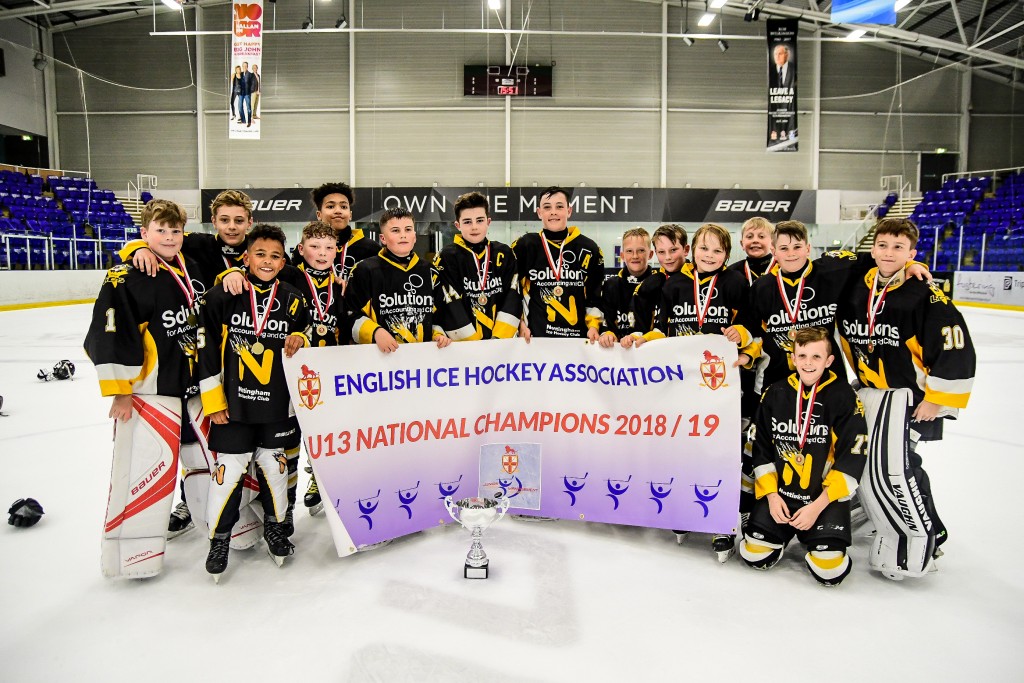 Nottingham Tigers, Streatham, Kingston Sharks and Guildford Firestars were the four qualifiers from the junior league season.  In the semi final games Streatham beat Kingston 5-2 while the other semi final went all the way to a shootout.  Nottingham and Guildford tied 3-3 after regulation and overtime, the Tigers holding their nerve in the shootout to win.  The bronze medal game went the way of Guildford, 7-1 over Kingston.

The national final began with a crazy first period, where the teams shared no fewer than seven goals.  Nottingham jumped to a 2-0 lead thanks to a brace from Jack Hopkins.  Streatham were level in the eighth minute – scoring two in 17 seconds through Milique Martelly and Harry Corkum.  Ellis Ricci restored Nottingham’s lead, before Megas Kanys tied it up again on ten minutes.  Edward Gibson put Streatham ahead at 12.14 and that would stand as the game winning goal.

A scoreless middle frame followed before Leo Markey added the insurance marker in the third period to send the national title to Streatham. 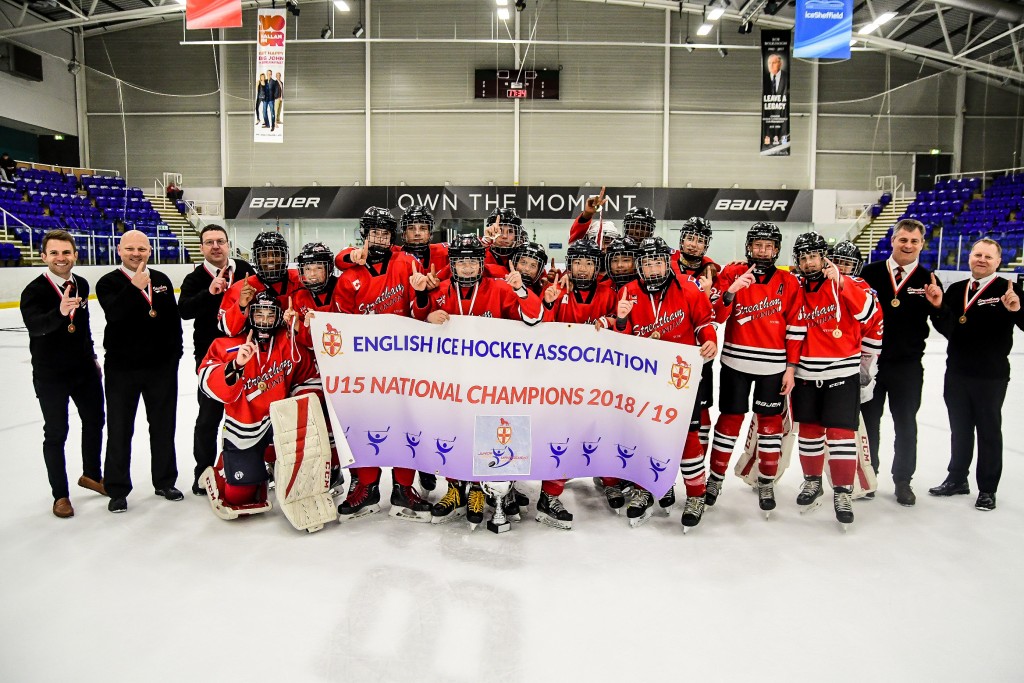 The most keenly contested games of the weekend were in our top age group, Sheffield Steelhawks, Okanagan Academy, Swindon Cougars and Telford Tigers qualifying for the semi finals.

Sheffield beat Swindon 4-1, while OHA saw off Telford 5-3 in Sunday’s late game.  The bronze medal game went the way of Swindon 4-2 over Telford.

In the grand final, the first period was fairly even until Sheffield potted a late double at 16.31 and 17.45 from Jack Brammer and Tyler Nixon to take a 2-0 lead at the break.  Jack Goodchild had OHA on the board at 22.41 only for Joel Gavigan to restore the two-goal margin before the half-hour mark.  Aaron Moody again reduced the arrears (35.11) but Sheffield pulled away with a quick pair of goals just 12 seconds apart in 38th minute, Brammer with his second and Jack Parker on target.

Curtis Warburton made 10 saves for Sheffield in a scoreless final frame and the Steelhawks celebrated their national title. 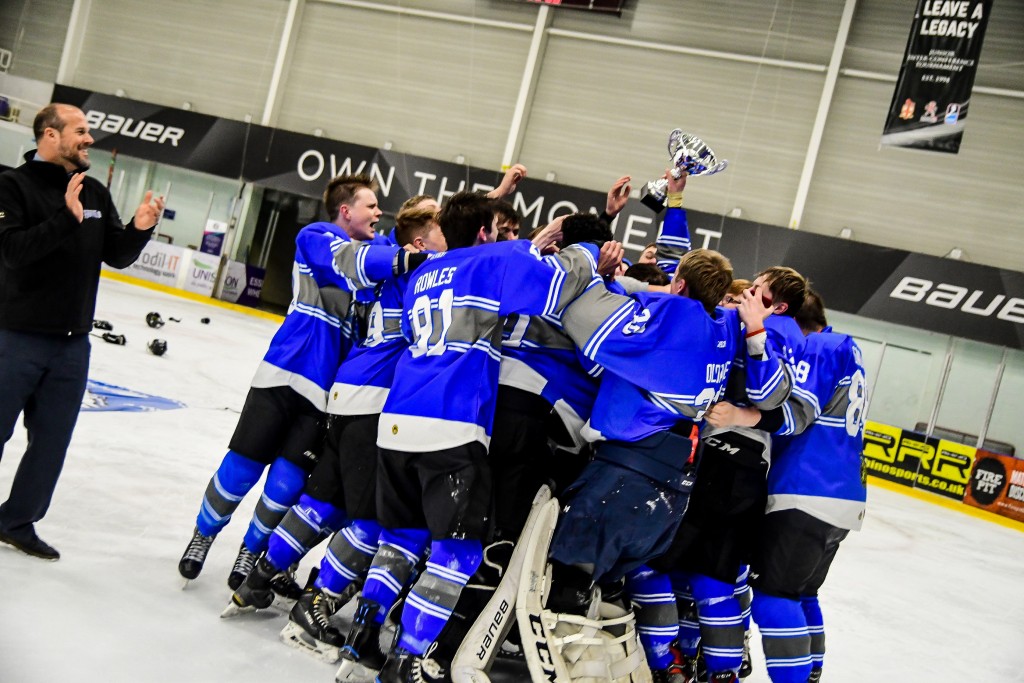 Off the ice, the JLMC weekend nominated DKMS as its chosen charity supporting their work against blood cancers – inspired by linesman Haris Hussain who was diagnosed with leukaemia in March.  A raffle and bake sale took place across the weekend, while Liam Kirk popped in on Saturday and donated a stick which he’d used in the World Championship against Canada.  That was auctioned off to raise more funds for the pot.

At the time of writing the total had not been confirmed but organisers were expecting a sum in excess of £1,000 to be donated to the charity.  A huge thank you goes to everyone who bought tickets and cakes, and to Sheffield Steelers, Mowbray Sports, PuckStop, Ice Locker, Bauer and everyone who donated a prize to the raffle.  In the end over 40 prizes were given away to support a fantastic cause.

There is a JustGiving page if you would still like to donate to the JLMC charity.

My Team Photo were once again our official photographers, and their gallery is online with a discount code FIVEROFF valid until midnight on Friday 31st May for anyone buying images online.  The gallery can be found here.

All games were filmed by 247.TV and the webcast can be watched on replay – go to their website here to order the webcasts you would like to watch again. 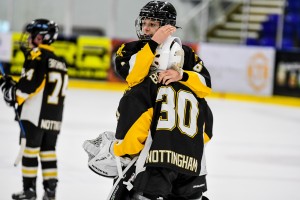 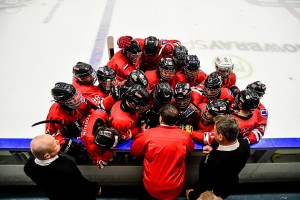 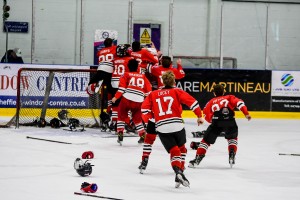 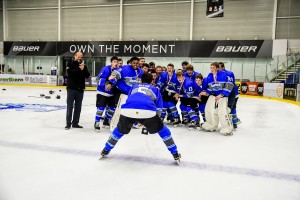 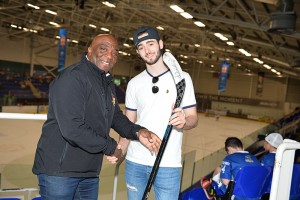 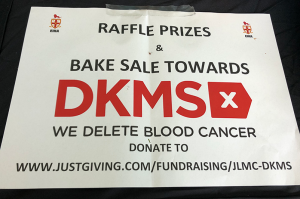 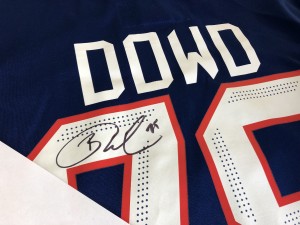 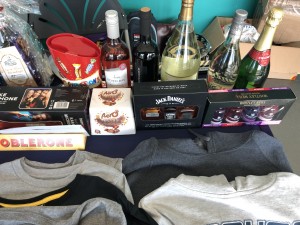