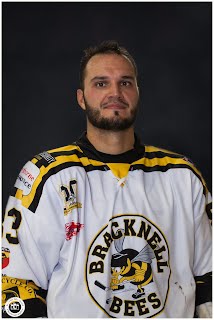 The NIHL disciplinary panel have confirmed a suspension of 18 games on Bracknell Bees forward Frantisek Bakrlik.

Bakrlik was assessed a Match penalty for checking to the head during the Bees’ NIHL South 1 game against Basingstoke Bison on Sunday February 25th.  This is the player’s second offence of this type, receiving a six game suspension in November 2017.

The penalty points take the player beyond the thresholds of 15, 20 and 25 points so under he is suspended for an additional 12 games (three plus four plus five).

This makes a total suspension of 18 games.  Two games have been served over the weekend of 3/4 March.

The League Management Committee (LMC) and disciplinary panel have reaffirmed their intention to review the discipline rules and interpretations with regard to instances of serious foul play this summer.

A full list of NIHL discipline decisions can be found online – this will be updated with current decisions later this week.