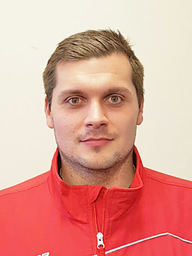 The English Ice Hockey Association are pleased to announce the appointment of Euan King as its Technical Director for Netminding.

Peterborough-born King, 29, has a wealth of experience between the pipes as a player in the EPIHL, NIHL as well as a short spell in Elite League with Basingstoke. He represented Great Britain at u18 and u20 level with a gold and silver medal respectively.

More recently, King has turned his attention to netminder-specific coaching and as well as his own goalie schools under the Paddledown brand, he is the head goalie coach for the England National Team Programme – a role he will continue.

EIHA director for coaching Paul Hayes said: “The role is to develop our education and coaching programmes and training in relation to netminding. We are also looking to develop pathways for talented goalies and support club netminding coaches within the association.

“We are delighted to appoint Euan King, his resume is first class and he is a highly respected goalie coach. We look forward to working with him moving forward.”

King himself said on taking up the role: “I am excited for this opportunity and I am looking forward to putting in a long term plan to aid the development of goalies in this country. It is a position that has been abandoned for so long.

“This won’t be a short term fix but a long term five to ten year process to increase the level of goalies we produce in this country and give the coaches the tools to be able to coach their goalies properly.

“There will be bumps in the road I am sure but collectively as an organisation from the Coaching Programme, the JLMC, Conference and England programme, we can all work together in the best interests of the young players who sit under the EIHA banner.

“Plans are already underway in the background and I am hoping to run our first goalie seminar next summer with some exciting and knowledgeable guest coaches from around the hockey world.”