Sutton GM, Gary Apsley, confirms today that the Club’s grassroots development programme introduced a year ago will resume on 6th September. Little League was created with the intention of bridging the gap between U10‘s Cross Ice hockey and “grown-up” hockey and with more than 125 players passing through the doors at Lammas between September and May, the programme exceeded all expectations.

“We introduced the Little League concept to the Midlands Clubs by providing an open invitation to any registered player to come and take part and I was really encouraged by the enthusiasm from players and parents alike. It seems like we hit on something that people are happy to support.”

Sutton’s approach was completely different to the cross-ice model and the outcomes were different too. First, the ice rink at Lammas, Sutton-in-Ashfield, is 36m long by 18m wide. By contrast to say the Olympic facilities at nearby Ice Sheffield and NIC Nottingham, Lammas is tiny. In fact it’s about 1/3 the area of the Olympic pads (60m x 30m) at Sheffield and Nottingham, but Apsley thinks that is a benefit, not a hindrance and he believe’s that the Lammas ice surface is a perfect size for U11’s ice hockey. The rink at Sutton has full markings, gates and plexi glass and Sutton invested in a set of custom made goals too which means it has everything needed to give the smallest players their best possible start in ice hockey. 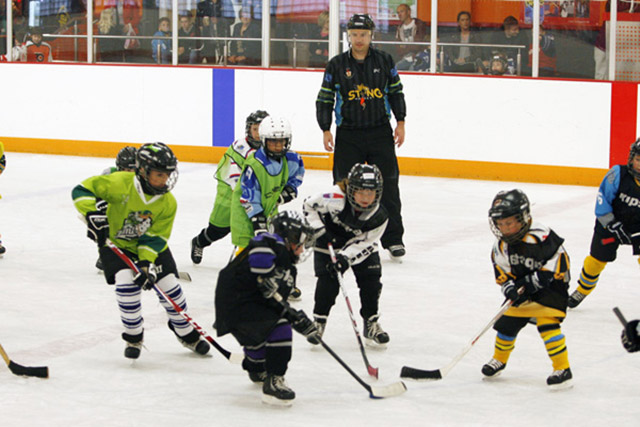 With more than a dozen Lil’ League events being held last year Sutton gained plenty of experience running the programme and having reflected on the achievements delivered by the programme Apsley was keen to see it return in the forthcoming season. The changes to the junior age groups appear to have helped with Sutton’s cause too and with the EIHA’s new Junior League Chair, Jaquie Pye, promoting a fresh approach to grass roots hockey through a new Stage 1 Development initiative, Apsley believe’s the future for Little League looks very bright indeed. He added. “I spoke to a lot of parents of the youngest players last season about what it is that they are looking for from hockey for their kids. For most the answer is simple. Opportunity. And they seem to love the Lil’ League concept.”

Sutton’s plan for this coming season is to resume Little League for the new U9 age group and having successfully negotiated additional ice time Sutton will also introduce a programme for Under 11’s under the banner of Big League. Sting Development Director, Rob Saunders, explains the Club’s thinking. “We have a great little rink that is perfect for the younger kids. At Sutton they all get plenty of time on the puck while constantly moving their feet. We have seen our own players go on to Conference and England teams so we know we can deliver players with the right skillset. So rolling-out Little League to more kids is probably the best use that rinks like Sutton can be put to for the benefit of the sport.”

So with two programmes running in the 2015/16 season, Sutton coaches are going to be extra busy. Anyone wishing to take a closer look at Little League or Big League should visit www.stinglittleleague.teamapp.com for more information and check-out photo’s and video from past events.