Over 400 players aged 10 to 17 will play 44 games in three days representing five regions, or Conferences, from across Great Britain. In addition on Friday night, England play Scotland in an Under 19 international – one of the longest running international challenge matches – for the Frank Dempster Trophy.

Tournament organisers have named Friday “ORANGE FRIDAY” to kick off the weekend in style with fun and competitions on and off the ice.

The orange theme comes from our charity partners this year, Jack O’Donnell Foundation, (www.jodf.org) named in memory of a young ice hockey player who sadly died in 2010 at the age of 15.

Great Britain’s gold medal winning captain Jonathan Phillips will be performing the first puck drop for the England-Scotland game, while other GB players and the World Championship trophy will also be present on the night.

A GB jersey signed by the gold medal winning squad is up for grabs in the Orange Friday raffle, along with a chuck-a-puck competition, face painting, cake stall, glow sticks and special merchandise for the weekend. 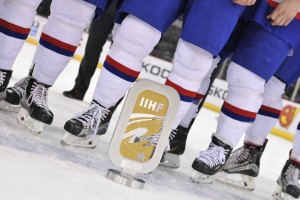 All funds raised at the EIHA junior events this year are supporting the Jack O’Donnell Foundation. Previous fundraising in the last two years has raised over £8,500 for Teenage Cancer Trust and RNLI.

Friday’s on-ice action starts with a very special mini game, called the Mighty Mites – u8 players from across the country – who will have been training all day in a special event for them.

They will play a short demonstration game either side of the first period of England v Scotland.

The best thing about Orange Friday is that admission is completely FREE.

Junior League chair Jacqueline Pye said: “We wanted to make a big thing of the opening night and get as many hockey fans in the building as possible.

“The England-Scotland game is always a great match, and the two sides this year look really strong. On top of that the Mighty Mites are the next generation of players who get a chance to play in front of a big crowd.

“Having Great Britain players involved is huge. I reckon every one of the gold medal winning squad except maybe four players have been through Conference weekend. It’s been a huge part of their hockey development and it’s great they can give something back.

“When I was in Belfast and talking to the players they all said they would do whatever they could be in Sheffield for Conference. It’s fantastic for them to support our event and the players of the future.

“Then there’s the charity – Jack O’Donnell was a huge prospect as a young player and we lost him tragically at the age of 15. The foundation named in his memory does great work and it’s right that the ice hockey community can help – every penny we collect this weekend goes toward the JODF.”