Over the past two years the Junior Leagues Management Committee (JLMC) of the EIHA has named an official charity and raised funds at their showpiece events such as Conference weekend and the National Junior Finals.

Charities in the past to benefit have been the Teenage Cancer Trust and the RNLI, with over £8,500 raised in total for those charities.

For 2017 the JLMC fundraising will be in support of the Jack O’Donnell Foundation which has a special link with ice hockey and junior hockey in particular. 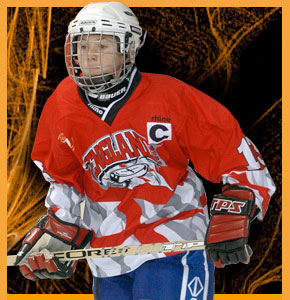 Jack O’Donnell was a young man who loved to play and support many sports. He loved football, especially his beloved Manchester United, but Jack’s gift was for Ice Hockey for which he had a driving passion.

There were no family ties or history with Ice Hockey in Jack’s family, he discovered it himself and wanted to play from a very early age. He played his first game out on the rink when he was 8 years old, and his career grew from strength to strength. After a couple of seasons at Oxford City Stars, he moved to the Swindon Wildcats. His commitment was as strong as his talent, and with great facilities and coaching, Jack flourished.

Jack represented the South West of England and also went on to play for England. He trained and played as much as possible visiting many counties and countries along the way. Jack’s skills as a player and a leader were rewarded with the great honour of becoming captain of his country at junior level.

Jack decided to become a professional ice hockey player and left school after his GCSEs in the summer of 2010. He was due to start his apprenticeship with the Swindon Wildcats senior team after the summer holidays. Tragically, during those summer holidays, just as Jack was looking forward to his 16th birthday, he suffered a fatal accident. Despite medical efforts Jack passed away on the 27th of July 2010.

The Foundation set up in his name aims to give other children the inspiration and financial support that Jack received, so that they too can achieve their potential in the sport they love.

All JLMC events over the next few weeks will be raising funds to support the work of the Jack O’Donnell Foundation.  That began last weekend at the Rob Laidler Plate Finals, fittingly in Swindon.

Special JLMC/JODF merchandise will be available and fundraising events will take place at Junior Finals, Conference and Women’s Trophy Weekend running through until the beginning of June.

JLMC Chair Jacqueline Pye said: “The idea to fundraise at the junior events has been a great success and this year it is fitting that we support a charity set up in the name of a very talented junior player who sadly died at a young age.

“When the South West conference nominated the Jack O’Donnell Foundation to be our charity for this year it didn’t take too long for the JLMC to agree.  They do a lot of amazing work to support young sports people while remembering a special young man.

“I hope we can raise a huge sum over the next few weeks to make a meaningful donation to the Foundation.”

Any donations of raffle and tombola prizes from clubs and conferences for Junior Finals and Conference Weekend will be gratefully received.