The event follows on from the successful u11 Conference Series and Winter Classic for u13 and u15 sides, which means the players are playing more games of a better standard to aid their development.

The teams played games of 3×15 minute periods with running time in periods 1 and 2, stop time in the third.  There were two matches played on Friday evening and ten each day Saturday and Sunday, meaning a frenetic programme for all involved.

At the end of the round robin phase, three sides were tied at the top of the standings on eight points from their six games – Okanagan UK, Midlands and Northern.  Great Britain’s U16s finished fourth with three wins and a tie from their games.

The head to head records between the leading teams meant the final was between Northern and Midlands.  Mids scored early in the first and second periods to open a 2-0 lead before North hit back with a powerplay marker to reduce arrears before Midlands restored the two-goal cushion just before the second interval. 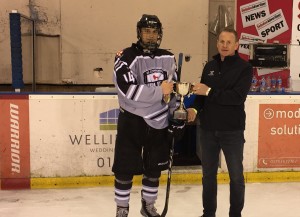 An end to end final frame saw North score a second but solid defence and good goaltending held firm for Midlands and they lifted the trophy from Neil Stone of Warrior Hockey UK.

JLMC chair Jacqueline Pye said: “It was a very busy couple of days but the top age players deserved their chance to play an event like this, and they made the most of the opportunity.

“The games were keenly contested and overall quite close with only a couple of big scores.  It was great for the Conference sides to play competitive games, and from our side we enjoyed having Great Britain u16 here to give them a meaningful tournament to start their development too.”

The JLMC are grateful to the Conference chairs for their support of the event, to the players and coaches of all seven teams and the supporters who watched the action in Swindon.  Paul Kelsall at OHA helped with a lot of the groundwork in Swindon and organised our off-ice volunteers for the weekend.  We are also grateful to the staff at Better Swindon, the Link Centre, for being fantastic hosts.

Finally to Neil and Pauline at Warrior Hockey UK – thanks for their sponsorship and continued support of junior ice hockey.

Congratulations to Midlands on their Spring Classic win, we look forward to seeing everyone again in Sheffield for the full Conference tournament at the end of May.

You can relive the action from the Warrior Hockey UK Spring Classic thanks to our broadcasters 247.tv – they covered all 22 games with commentary from Jonathan Bell.  Go to their website to order a webcast to watch at your leisure.