JLMC: Manchester’s Conference selections going down a Storm with Elite side

On Saturday night (February 3) Elite League side Manchester Storm showcased the talent in their Academy prior to the game against Coventry Blaze in Altrincham. Storm players presented Northern Conference shirts to nine players who have made the north of England representative teams this season. 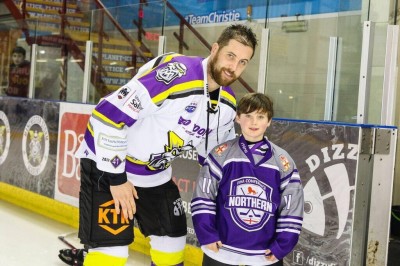 The Storm linked up with the Trafford Tornados last summer to create the Energy Check Manchester Storm Academy and director of junior development Mark Thomas felt it was a great opportunity to show how the relationship is working.

“The players have worked really hard this season and have improved a lot and this is a great reward for them,” he said.

“It was fantastic to see them on the ice at the weekend and the fans gave them a really big cheer which I am sure the kids will have enjoyed. We have a lot of talent in the Academy and it is exciting to see the players starting to come through.”

Storm Academy chairman Seth Bennett is delighted that the partnership between the two clubs has proved to be fruitful.

“It was always a bit of a leap of faith in the summer and we were never entirely sure exactly how the relationship would look. I can’t thank Storm coach Ryan Finnerty and the rest of the club’s management team enough for the way they have supported us.

“Storm players have joined us on the ice every week and worked alongside our coaches to help the kids improve. It is always fantastic to see how that contact really inspires the kids to work harder and improve.

“Saturday night was a real highlight for the club and show of unity as we got the chance to give the kids a massive pat on the back for the heard work they have put in and to celebrate the achievement of being North of England players.”

The Storm Academy has continued to grow since the summer and now has over 100 players training and playing every week, which is a significant increase on this time last season. 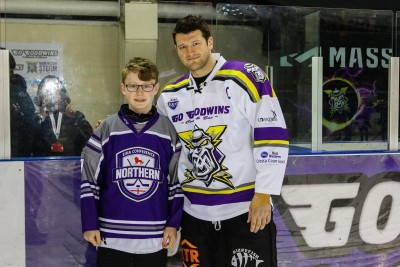 Thomas added: “Things are going really well and I think under the guidance of head coaches Nick Crawley and Kev Cassidy we are all looking forward to helping the kids become the best players and people they can be.”

The Storm Academy are looking for more coaches to join the club to cope with the demand of more players. If you are a former player, or you would like to get involved them, please visit their Facebook page and get in touch.