JLMC: Isle of Wight juniors battling on without their home ice

In early October the doors to the ice rink at Ryde, Isle of Wight were closed by the building owners for the last time and skaters and hockey players were locked out of their home rink.

Shortly thereafter the senior team at the rink, Wightlink Raiders announced that they were unable to continue without home ice and withdrew from the National League Division 1 south.

Two months down the line, however, the Wightlink/Isle of Wight name is still appearing in EIHA fixtures, results and league tables despite no blades touching ice on the island in the mean time.

Wightlink Buccaneers, the NIHL South 2 side, reached agreement with the NIHL and clubs to complete their schedule playing only away games for double points. Remarkably they are top of the League with 11 points from six games.

Also still playing are the Wightlink Juniors – like the Tigers playing just away games for double points so the youngsters – some of whom are in the EIHA’s England and Conference programmes – can continue their hockey season.

The teams operate at u9, u13, u15 and u18 and had enjoyed a promising start to the 16/17 season – having lost home ice last season due to storm damage at the Ryde Arena.  When the doors were locked for good the future of the club looked bleak.

Players are training on dry land – off-ice fitness and gym work – and the club is looking into the purchase or hire of roller blades to try and get at least some skating practice on the island.  Players are also practicing very early in the morning or late in the evening at rinks in the south of England – this of course with the addition of the travel to and from the mainland.

The club have today launched a crowdfunding initiative via JustGiving with an initial target of £2000.  Their page can be found by clicking here. 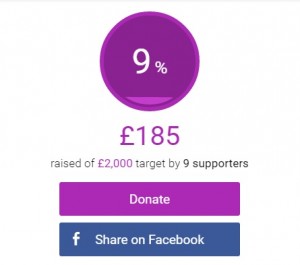 Early donations have raised almost 10% of the target

Club chair Ann Tavener said: “The clubs we play in the junior leagues have been supportive and are generously helping us by arranging ice time at their rinks to train and continuing to play games against the ‘homeless’ Raiders teams.

“The ice time that we’re getting is, understandably, very early in the morning or late at night. This means the children will be getting up at 3.00am to skate in early morning sessions at Guilford or getting home at 1.00am after a late evening skate in Basingstoke.

“Our team members come from all backgrounds and almost every school on the Isle of Wight. The players’ mums, dads and guardians and our coaches already do a lot to meet the costs, but we can’t make this work by ourselves. The money we raise will go towards additional travel costs and off-Island skating practice.

“We are immensely grateful to Wightlink who continue to provide us with free ferry travel and to CLC who have sponsored us for several years.”