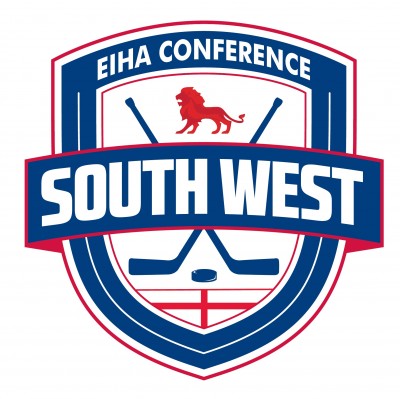 South West Conference tasted success in both the u11 and u13 Conference Series events last weekend, as the JLMC held their first development event of the season at Ice Sheffield.

The Conference Series was introduced last season at u11 to give the Conference teams more competitive games before the main season-end tournament.  This season the events were extended to cover u13 teams too.

October’s opening events featured just the four EIHA Conferences as Scotland were holding their own development and selection days.  The future Conference Series (December and February) will have all five Conferences in play.

The weekend began with the first u13 event, where South West defeated South East 3-2 in a thrilling final.

Earlier, Midlands had won three from three in the group stage to finish top of the table, but they were undone in the semi final.  The game of the round was South East’s 5-5 tie with North.  SE raced to a 5-2 lead but North battled back in the final period, eventually scoring the tying goal 0.19 from time with the goalie on the bench for the extra attacker.

In the semi finals, South East edged Midlands 4-3 while the South West saw off North in the other tie.  Midlands clinched third place overall with a 2-1 defeat of North in the playoff before the dramatic grand final took place.

South West made if a blue weekend double, winning the U11 Final 6-1 against Midlands.

Alfie Goddard bagged the opener inside a minute, and Leilo Bellamy made it 2-0 at 2.49.  Goddard’s second extended the lead in period two before Ewan Woodward had Midlands on the board at 28.49.  SW proved too strong in the final period, though, and netted three without reply – Lucas Fong and Harvey Rose on target either side of Goddard’s hat-trick marker.

In the round robin stage the games were well contested, close-run affairs including a 1-1 draw in the SW-SE derby game.  SW finished top of the table with five points from six, Midlands were second with South East and North completing the standings.

SE and North tied 2-2 in their third place playoff, the result being decided on penalty shots as Leon Raj netted the decisive score.

JLMC event organiser Gordon Douglas said: “Thank you once again to our players, parents and staff from all of the teams for helping to make the event a great success.

“We had 18 games over two long days, a lot of back to back games given the four-team format but the players just got on with it and played some excellent hockey.

“Thanks to colleagues from the JLMC for helping run the event and to our off-ice volunteers in the penalty boxes and goal judge seats.

“We’re looking forward to the next Conference Series in December when we will have all five regions taking part.”

All games were covered by 247.tv and watched live online by friends and family unable to make it to Sheffield.  The games are still available to purchase and watch on replay if you go to the 247.tv live pages and select the games you want to view.

247.tv are aware of some issues with audio and video being out of sync, this was mainly on Sunday but also affected the first two games of Saturday.  Any customers who bought the first two u13 games or any u11 games then you will be able to watch the replay for free.