Monday saw the girls up early for breakfast and up to the ice hall for early morning practice and a chance to work on some line combinations and systems development. A good session with the girls gradually understanding what is expected of them at this level. 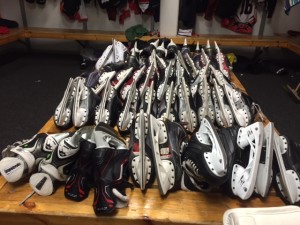 Pekka from ‘Prosharp’ shop came along to the rink to talk to the players about their skates and then took all the boots, profiled and sharpened them.

Lunch and then on for the daily activity, today we have kinball which is well worth a look on the internet, a great afternoon of fun and exercise.

Then it was all the players’ favourite… day 1 of off ice testing and then dinner.

Afternoon rest and then into a game cycle: warm up, game, cool down, shower, snack, relax and bed.

At the end of the evening, head coach Tim Healand said: “The game itself was exactly as we expected – hard and fast with teams well drilled with excellent basic skills and fitness. The first period saw the team struggling to come to terms with the speed and movement and saw us down by three. 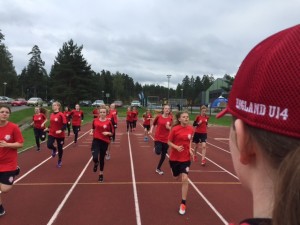 “In the second period we began to come to terms with the standard.  We improved again in the third and put some offence together but still lost the odd goal.

“This was the first time the majority of the team had played at international level and it has certainly opened some players eyes.”