Awake at dawn to a misty morning, breakfast, rest, warm up and on the ice 9am for a 90min session. Reviewed the mistakes made last night and worked hard on ways to put them right.

Cool down inside upstairs overlooking the rink, wondered why as the day had brightened up and no rain……found out the reason pretty soon…. the u18 team from Red Bull Salzburg were on the ice and the girls wanted to watch them practice whilst cooling down ………..yea right!, who are they kidding!

Lunch and then into a street dance workshop, interesting.

Everyone’s favourite, testing! I think the team really like it…..we may do it again tomorrow just for them. 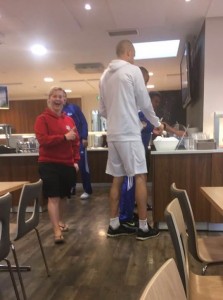 Dinner was followed by rain so the girls had a damp time walking back to their rooms. The staff decided to sit it out in the restaurant and as you can see Saffron met some international players…. not sure what sport!

Girls up to the rink in the pouring rain luckily the staff had a shorter journey except yours truly who had to walk a player back to the accommodation block and then all the way back to the rink in a thunderstorm because she forgot her sweats… you know who you are.

Tonights opposition were TuTo from Turku, the Finns started the game the quicker, with England a little hesitant and scored at 2.24 but the girls came back and it was a pretty even period.

The second was our best period to date and we outshot them 9 to 7 but we could not find the finishing touch.

The third was an end to end period with both sides having chances but with England pushing for the equaliser the Finns scored on a breakaway 53.45. The girls tried everything to get on the score board but it was not to be. Final score 2-0.

A much improved game by the whole team with much of what we are working on being implemented which is all we can ask as coaches.

Cool down and shower and then a quick snack and back to the house for well deserved hot chocolate and cookies before bed.

A much happier camp as would be expected with the improved performance.

Goodnight and sweet dreams from the management