Up early so we can pack up as this is our last morning.

Some very sleepy players this morning …. I wonder why!

Breakfast, on the coach and off to the rink.  A light run and warm up and the girls were all wide awake and ready to go. Fore checking and basic systems play.

Lunch was followed by a big surprise for the girls Pernilla Wiberg olympic silver medalist with team Sweden came to talk to the girls.

She went through her development, her struggles to be accepted in boys teams her determination to be the best, what it’s like to be at the Olympics and what it is like to beat the USA. 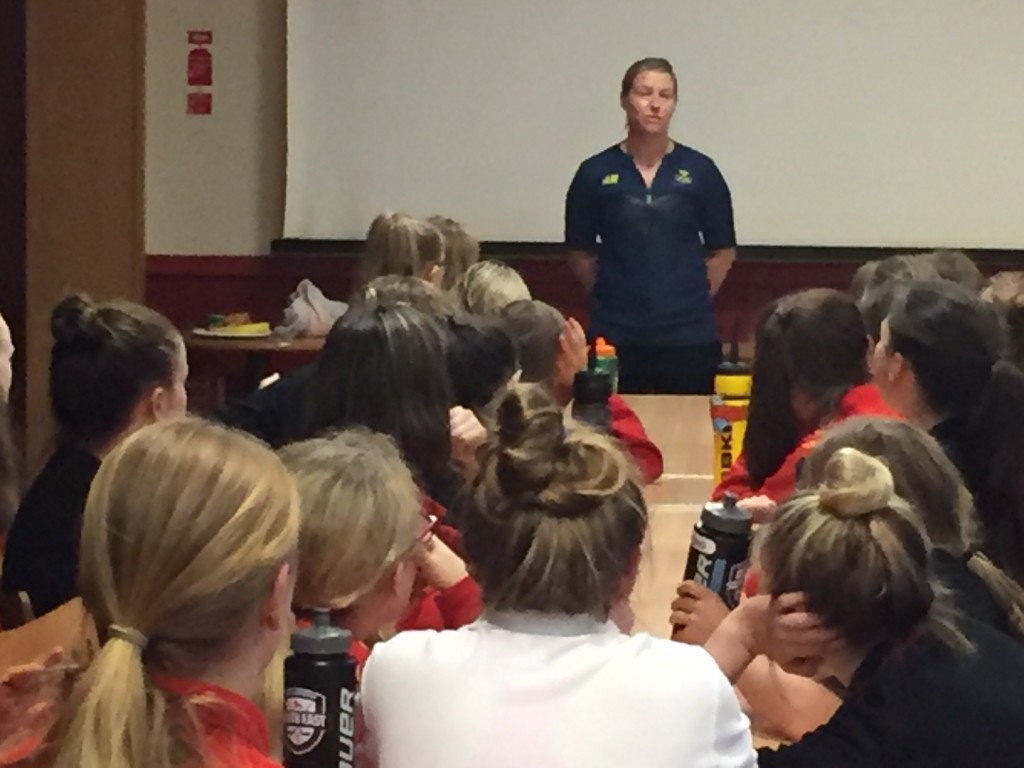 I think some of the girls were really surprised at her training and playing week but it only re enforced what we had been saying all week.

Pernilla then played a game of guess how many caps she had…. most of us were way way out but not Jessie Taylor who was nearest with 278 and won a team Sweden polo.

A wonderful insight into a player at the highest level and a big thank you to Pernilla for taking the time and effort to come to the camp.

After the excitement it was off for a warm up before the end of camp game.

Every year we try and match player for player so we end up with an even game, and the game is a showcase of what the girls have learned in the week.

Good game with Team Blue running out winners in the end over Team White.

After the game and a cool down it was a shower and get ready for the presentations.

Always a surprise when the sweaty players we have all week are transformed into elegantly dressed young women.

Certificates were given out to all the players for a week well done and then it was goodbyes and for many see you on Sunday at the Nationals.

This is a tough group to coach and manage with ages from 10 to 15 but this year’s squad was well behaved and were a credit as always to their sport. Hotel managers and staff are always amazed at how polite the girls are and this year’s group were no exception.

Our plans are based round giving the girls the basic skills, behaviour expectations and insights into hockey at a higher level.
Hopefully they will all develop into future England and GB players.

Finally a thank you to all the staff who work under Head Coach Tim Healand, Lyn Burton, Kirsten Deighton, Nicole Jackson, Abbie Thornton and Georgina Farman.

Thanks for a great week girls!