Sorry for the lack of an update yesterday, we all had quite a busy day. Yesterday started as a grey day with some warm drizzle. Late breakfast as it is a rest day followed by warm up. On the ice at 10 to continue working on speed and strength on the puck, checking (sorry battling for the puck) Then divided into 3 goalies with Nicole, defence with Tim and forwards with Paul. Good session with everyone showing improvements.

Cool down and change and lunch followed by a really intensive S&C session. Before street dance the team introduced Kissakalio to a variety of songs from their extensive urban play list. We had people coming in to see what was going on!!! (or what the noise was about depending on your point of view.

Street dance allowed the girls to sing along and throw some moves and have a good workout.

Late afternoon saw the girls divided into teams and take part in ‘Brian’s Finnish challenge” Brian our equipment manager had laid out a treasure hunt across the whole of the complex and the teams had to find the clues and get round the course taking selfies of themselves at various points. Lets just say never allow your daughters to map read for you!

The evening weather improved and the sun came out and we all walked down to the lake for a beach barbecue Finnish style. A sauna followed by a quick run down the pier and a jump into the crystal clear lake …..oooooops sorry crystal clear freezing cold lake. The team had a great time and repeated the procedure over and over until it was time for the barbecue. Sausages both normal pork and Finnish black and chicken all cooked over a wood fire BBQ pit by Arto, our host and the guy who introduced us to this great place. 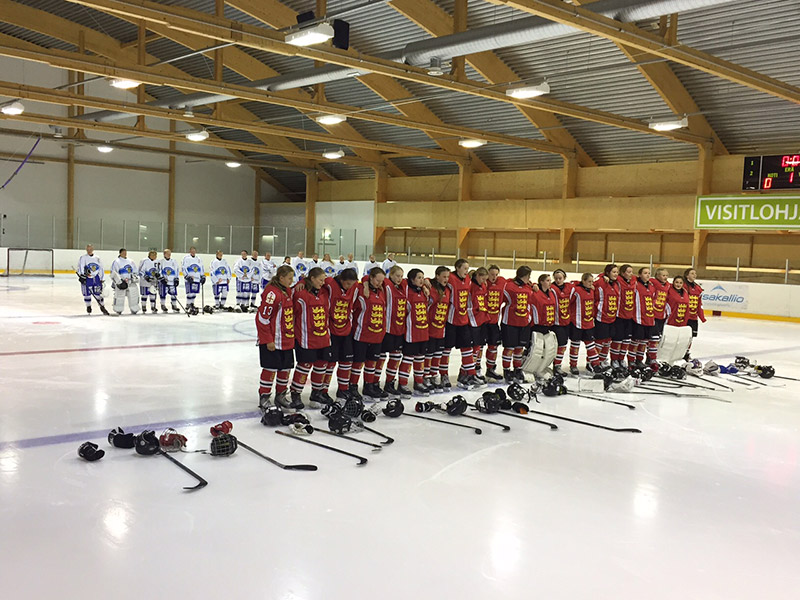 Bright sunny start.  Back to normal breakfast time 7.30 and back into our regular routine, warm up, on ice practice, speed both on and off the puck, back checking and building the offence and defence plus some team plays then warm down.

As we were practicing most of the girls saw a large number of girl hockey players arriving……tonights opposition …part of the Finnish u15 national squad!

S&C in the sun on the track followed by lunch.  The afternoon saw us try a new activity Giant Trampolining and acrobatics, great fun and well done to all the girls, falling backwards of the board takes a lot of faith.  Rest and dinner followed by our afternoon sleep.

Warm up with the Finnish team and Jiri who is also S&C of the National programme. Team started well and made a couple of chances early on, pretty even game but the Finns took the lead at 5.56. Period continued with both teams making chances but the Finns doubled their lead with goal scored as the Finns didn’t crash the net they went right through it and Lauren! (goal timed at 13.25)  As I have said these are International rules not in house England rules.

1st period score 0-2   Second period had England take some penalties as the Finns exerted some pressure but the period finished with neither team scoring. 2nd period 0-2.   England changed the goalie for the third and England exerted some pressure, but the Finns scored again when a defensive zone break down resulted in a third scored at 32.04  Olivia was hurt in a collision later in the period and had to be replaced with Lauren and the Finns scored a fourth a final goal at 34.51 to finish the game as 4-0 winners.

Both teams cooled down together and we look forward to playing them again tomorrow.   The girls are beginning to use the skills and techniques they are being taught in the games but at this level mistakes are punished and the pressure is relenless.  This has been a wonderful opportunity for us to play a game against a country that are Olympic finalist. We can then see how far we have to go.  Quick supper and a set of very tired players to bed.